How would Lily Allen describe this cover?

"I spent so much of childhood trying to change, and I just got sick of it." [Beth Ditto] 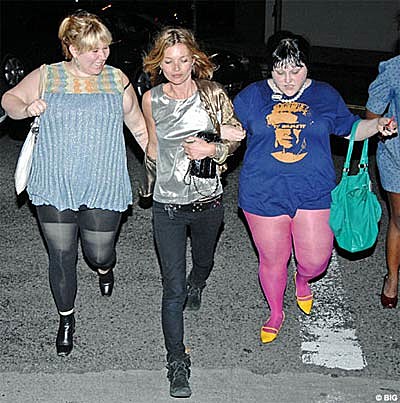 Inside the issue Beth talks about Paris Hilton & Kate Moss

Yet one of the things Beth Ditto does gives a f*ck about, is body image. So much so, that Beth recently refused for The Gossip to play instores at Topshop, citing her dissatisfaction that there isn’t a clothes range available in her size. She even went as far as to offer to design clothes for them. She’s never claimed to promote her body size (“I’m just saying people should be empowered about who they are,” she tells us), yet it’s worth asking, does she feel a responsibility to pick a side in the size zero debate?

“Not at all,” says Beth, immediately. “Things are more complicated than that – there’s too many factors to pick a side. The older I get and the more models and designers I meet... sometimes models are naturally just thin. Like, that’s their size.”

When you talk about meeting models, do you mean Kate Moss?
“Kate is amazing,” purrs Beth. “I spent one night talking to her and she just said the most amazing things about bodies. At first I didn’t think I was going to like her, but she just turned up to one of our shows and said, ‘Do you know what I hate, Beth? When people tell my big girlfriends, ‘You have a beautiful face...’’ I mean, that’s a really radical concept.”

Do you not think Kate Moss actually has a responsibility to answer to the size debate, though?
“You can’t hate a person for dieting, and you can’t blame a person for feeling shit about themselves. You have to blame the machine that feeds it, the thing that makes people feel like that. There are lots of things that are part of that machine, and it’s too easy to lay the blame at the feet of women – men don’t know what it feels like to be a woman and be expected to look a particular way all the time. The Beckhams are part of the machine; Paris Hilton is part of the machine. There’s that thing Paris Hilton said about Lindsay Lohan – ‘You’re poor, ugly and fat’. It’s always women who are victims of that machine and the messages the machine gives out.”

But surely Kate Moss is that machine?
“I had those conversations with Kate,” says Beth, “and Kate agreed with me. She’s a smart person.”

Do you think she’s happy doing what she’s doing?
“I don’t know.”

But if she agreed with you...
“I have this thing where I don’t ever want to bad-mouth a woman. Except for Paris Hilton.” She laughs again. “Please tell me you saw that thing where she was crying in the newspapers, about her going to prison. It was so funny. I was laughing until I was crying.”

Tell me more about not wanting to bad-mouth women...
Beth speaks quietly again. “I pick and choose my battles. I think Condoleezza Rice is more of a goddamn shame than Kate Moss, and I think those are the things people should concentrate on. What I’m saying is that, if there’s anyone to blame for size zero, it’s not women. Blame the media. Blame gay men who work in the fashion industry who want these women as dolls.”