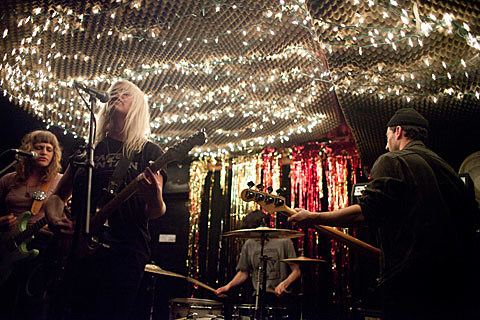 Beverly, the duo of Drew Citron and Frankie Rose, have just released a new song from their forthcoming debut album, out July 1 on Kanine. Like the whole record, "You Can't Get it Right" is an insanely catchy piece of poppy indie rock and you can stream it below.

The full-band version of Beverly (which currently doesn't feature Frankie in the group) made their live debut a couple weeks ago (they were really good) and they've got more shows on the horizon. Beverly play the Randall's Island Frieze Art Fair on May 11 with Suzi Analogu, Doble Pletina, The Suzan, and Laila. Then they'll play a record release party at Baby's All Right on June 28. No word on tickets or openers for that show.

The show at Frieze is part of a music festival dubbed WITHOUT that runs May 8 - 11 and is curated by Tom Tom Magazine. It happens outside the fair and is free and open to the public. Noveller and Clinical Trials are among the other bands playing -- full schedule is below.

Speaking of Tom Tom and Beverly, Fred Armisen interviewed Drew and Frankie for the Tom Tom and you can watch a video of them talking drums and other topics below.

Beverly "You Can't Get It Right"