photo: Beyonce at Made In America 2013 (more by Dana (distortion) Yavin) 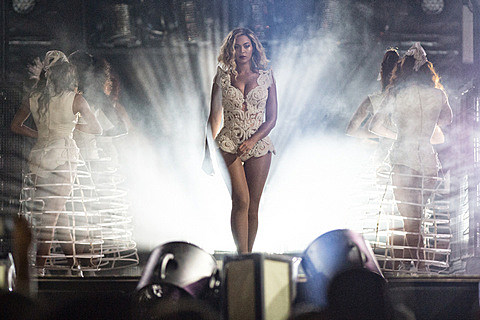 Beyoncé just dropped "Formation," the first new song she's released since the 2014 expanded edition of her great 2013 album Beyoncé. It's got a beat by Mike WiLL Made-It, an appearance by Big Freedia, and it was co-written by Swae Lee of Rae Sremmurd. If you liked her sorta-trap songs "***Flawless" and "7/11," you're gonna love this too. Oh and also, she says "I slay" about 90 times. As if we thought otherwise.

The video also pays a massive tribute to the Black Lives Matter movement. According to The FADER, it was directed by Melina Matsoukas who also did the "Pretty Hurts" video. Watch it below and pick up a free download at beyonce.tidal.com. According to SPIN, she'll give the song its live debut Sunday night (2/7) at Super Bowl 50. The main act is Coldplay. Bruno Mars is promised too and Rihanna and Justin Timberlake are rumored. Lady Gaga will sing the National Anthem.