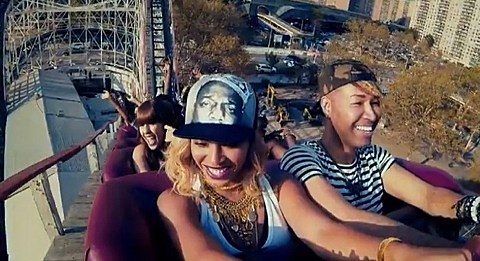 Beyonce took the internet by storm last week when she released her self-titled fifth album out of nowhere, and it's still dominating much of the online music discussion. SPIN gave it a 9/10 and named it a Spin Essential, and in Stereogum's Premature Evaluation, they said "there's some chance that Beyoncé's new self-titled album is the best album that anyone has released in 2013." Sales aren't too bad either. It broke an iTunes record, selling over 800,000 copies worldwide in three days and is expected to debut at No. 1 on the Billboard albums chart. Don't look for it at Target though.

As you may know, Yoncé released the album with a video for every track, and she's since made some of those videos available online to watch. The video for "XO" sees her hanging around Coney Island, riding the Cyclone and the Wonder Wheel, and enjoying other parts of the neighborhood. You can watch that video, along with the one for "Drunk in Love" which has Bey and Jay Z on a beach, below.

Beyonce's tour has her at Barclays Center Thursday (12/19) and Sunday (12/22). Thursday's show is sold out but a limited amount of tickets for Sunday's show are still available.

In other Coney Island news, Borough President Marty Markowitz's mission to turn the vacant Childs Restaurant into a 'seaside amphitheater' music venue to host concerts like his Seaside Summer series, is moving forward The Brooklyn Paper reported that on December 4, a major public oversight board voted unanimously to go forward with Markowitz's plan. He still has his opponents though:

But critics have long complained that sinking $50 million of taxpayers' money into transforming the 90-year-old building into a for-profit, upscale eatery and music venue is a severe misallocation of funds. They have pointed out that the neighborhood still suffers from sporadic heat and power outages, and is home to shuttered storefronts a year after Hurricane Sandy, plus the issue of sewers that flood during heavy rains.

Others have raised fears that the 40 planned yearly concerts will afflict nearby residential blocks with ear-splitting noise and nightmarish traffic congestion. Some have said that they would accept the new venue only with a community benefits agreement -- a legal contract guaranteeing that the development would hire exclusively Coney Islanders at a living wage.

The Council voted on the project yesterday (12/16), and we think it's all good news for fans of the theater, but stay tuned. Meanwhile, Marty Markowitz is leaving his job as as Borough President after 12 years due to term limits.

In more related news, the documentary on Zipper, the ride that was on West 12th Street in Coney Island, is available on iTunes. It screened at Nitehawk not long ago (10/30), and a review at Indiewire reads:

The Zipper itself is a twisting, thrashing carnival ride, one of the last remaining parts of the former Coney Island, left standing for months as the territory surrounding the ride was bulldozed, in an attempt to reach new lows in gentrification. To the locals, it is a landmark; to the suits, it's a relic.

For those out-of-towners, Coney Island was one of the very last vestiges of weird in the post-Giuliani-era New York City. Parades, attractions, and rides suited both those happy families eager to soak in the beach and the local weirdos, madmen and trend-setters that made the Brooklyn location a safe haven from the increasingly-hostile corporate landscape of Manhattan. That all changed when the imposingly-named Thor Equities made an aggressive purchase of the land, a transaction not made in good faith.

And in even more related news, Coney Island got its first YMCA, which opened yesterday (12/16) at Surf Ave and 29th St. You can take a look inside the new 44,000-square-foot facility in the video on News 12 Brooklyn. A big day for Coney Island with the new Beyonce video coming out AND a YMCA!

Beyonce and 'Zipper' videos below...