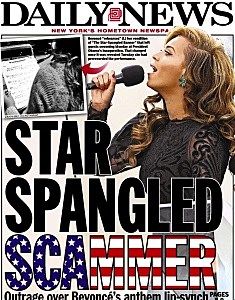 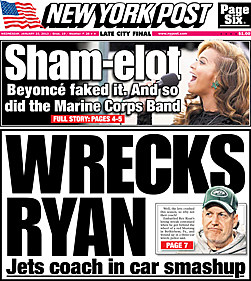 If it is true that Beyonce did lip-sync at Monday's inauguration, she wouldn't be the first artist to perform that way at a major national event. Here are a few examples:

* In 1991, Whitney Houston lip-synced her iconic interpretation of "The Star Spangled Banner" at the Super Bowl.
* Oscar-winner and former "American Idol" contestant Jennifer Hudson did the same thing with the anthem at the Super Bowl in 2009.
* Faith Hill also performed to a backing track for "America The Beautiful" at the same event in 2009.
* At President Obama's first inauguration in 2009, Yo-Yo Ma's performance came into question over "hand syncing." The acclaimed cellist had said the instruments weren't working properly in the very cold weather.

There were even reports that speculated Madonna was lip-syncing during her appearance at the 2012 Super Bowl half-time show. "The only thing Madonna proved during the Super Bowl 46 show is her irrelevance; the halftime show was so obviously lip synced that it was painful," wrote SBNation's JP Starkey. [CBS]

Maybe Beyonce (and the rest of Destiny's Child) will lip sync at the Superbowl too.

Video of the Inauguration performance in question below...