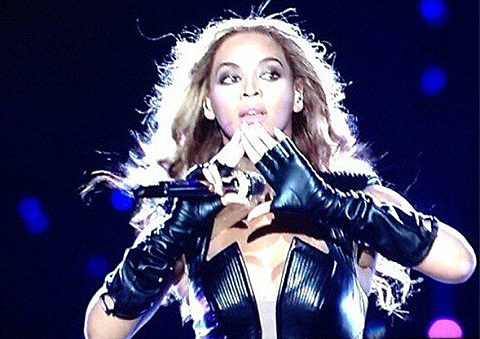 Beyonce used all manner of explosions, smoke machines, fire, LEDs, back-up dancers, not to mention her old bandmates, Destiny's Child, to add zazz to her bombastic Super Bowl XLVII Halftime show (2/3). You can watch the entire performance below. Look closely for Beyonce's alleged flash of the Illuminati symbol (above) that's causing all the rage on twitter, though those that don't believe in conspiracy theories will probably just tell you that her husband Jay-Z throws that up to symbolize Roc-A-Fella, like on his The Dynasty: Roc La Familia LP art, the cover of his Fade to Black movie, and in countless videos and live shows.

Superfans who missed the show are in luck, though. Beyonce has announced a massive set of dates called the Mrs. Carter Show World Tour that will kick off in Serbia and head back to North America during a second leg this summer. The tour comes to a close in Brooklyn on August 3 at Barclays Center. Tickets go on sale Monday, Feb 11 at 10 AM. Maybe this is a sign that her new album will be announced soon?

A list of all tour dates, the video of the half-time show, and the damning signs of the Illuminati during the Destiny's Child performance are below...