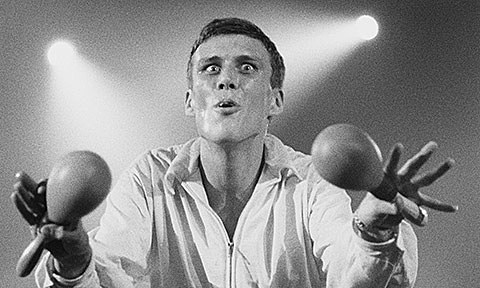 The 49-year-old maraca-shaking Madchester legend told the Manchester Evening News of his plans to run as an MP in his hometown of Salford, declaring his priorities were to 'stir things up' and bring about the redistribution of wealth, tackling cancer and dementia, and ending all war.

"I've been saying we need a revolution, and there's no good shouting about it when you're not actually doing anything," said Bez. "If you want to do something about things you've got to get into the corridors of power and take them on."

The sort-of musician, sort-of dancer, whose real name is Mark Berry, won Celebrity Big Brother back in 2005. Now, he vows to create 'a new world order'.

"If you're voting for me, you're voting as a protest about what's happening in the world at the moment," he continued. "I'm going to create a new world order and get rid of them and start again with a new, fairer system without evil being the main policy." - [Gigwise]

For those not in the know, Salford is a borough of Manchester. Bez has led a colorful life but is best known for his "freaky dancin'" in infamous (and awesome) Madchester group Happy Mondays. Last year the band celebrated the 25th anniversary of their 1988 album Bummed on tour and will be playing European festival dates this summer. The Mondays' last North American tour was in 2009.

A few examples of Bez' signature moves below...