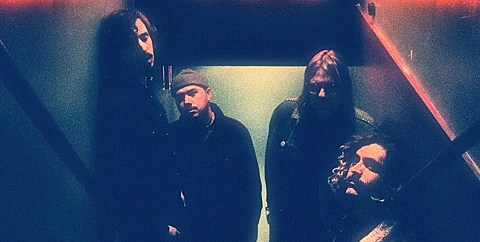 A few weeks back, we premiered a song by Torontonian psych rockers Biblical. Here's what we said at the time:

The last half-decade or so has produced a great deal of throwback psychedelic rock and proto-metal. While I'm a proponent of both, the whole fuzzy-riff/delay-everywhere approach has inevitably started to wear a little thin with the repetition. This brand-new track "The Quiet Crooks" by Toronto's Biblical caught my ear nonetheless, thanks in large part to bassist/vocalist Nick Sewell's surprisingly delicate croon -- no beardy yelling here. The instrumental component is righteous, too, with a piled-high psych production and a topping of supersaturated guitar leads.

The album that song came from -- Monsoon Season, which is the band's first LP -- kept growing on us. When we were given the opportunity to stream the album in full, we jumped on it. You can hear it below; Biblical's widescreen jams work well in a singles format, but they sink in even more effectively over the duration of Monsoon Season's efficient 38-minute runtime. I'm increasingly jaded about this style, so it's rare that I come across an example that I enjoy as much as I do this album. Monsoon Season will be out on March 11 via New Damage Records; preorder it here.

We had previously mentioned that Biblical would be performing at SXSW, which is unfortunately no longer the case. They do have a few Canadian dates lined up in the coming months, though, including an appearance at Quebec's Heavy MTL festival. US dates are reportedly in the works as well. For now, check out the Canadian dates (and the stream!) listed below.