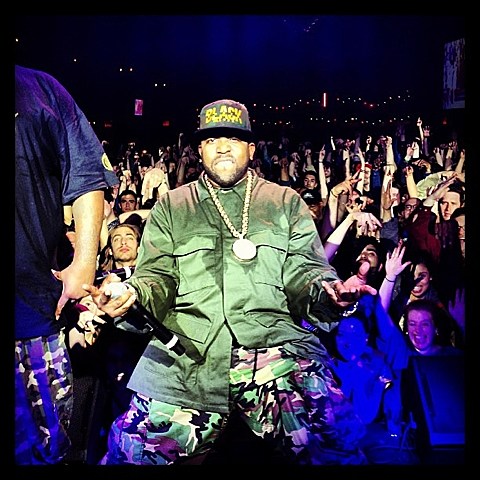 "That's what we call the appetizer portion of the set. We just gettin' started," said Big Boi at Brooklyn Bowl last night (4/24) after playing huge OutKast hits like "Rosa Parks," "ATLiens," his own big one, "Shutterbug," and a ton of others. It's the kind of material a different artist might have saved for the encore, but Big Boi doesn't waste any time getting the party started. He kept the whole show on that level for the entirety of the (approximately) hour and a half set, and with 20 years of quality material, Big Boi can do that kind of thing. The place was totally packed with people cheering, singing, and dancing all night. And the crowd's spirits were as high as everyone's on stage, Big Boi's excellent live band included. They played a ton of other OutKast favorites throughout the set too, including "Bombs Over Bagdad," "Ms. Jackson," "So Fresh So Clean," standouts from his 2010 solo LP ("General Patton, "Fo Yo Sorrows"), standouts from his 2012 LP ("Apple of My Eye," "Lines"), and of course, the sort-of solo cut, "The Way You Move."

Big Boi brought out tourmate/frequent collaborator/fellow Dungeon Family member Killer Mike a few times during the set, including during the song that put Killer Mike in the public consciousness, "The Whole World." (A video of that one is below.) He didn't, however, come out during "In The A," which the two rappers just released a remix of as part of their tour mixtape, which features every track where both Big Boi and Killer Mike appear (download above, stream below). On that mixtape, Killer Mike says he and Big Boi have an album in the works.

Killer Mike's opening set was short but all-killer, kicking off with "Big Beast," the riotous opening track off last year's R.A.P. Music. It quickly got the crowd going... but not enough for Killer Mike's standards, because it wasn't until he encouraged everyone to move in and go wild that the place really set off. And whipping out his Bone Crusher/T.I. collab, "Never Scared," didn't hurt either. Mike's set included other highlights from R.A.P. Music too, like the highly political "Reagan," which he performs a cappella. And though he usually prefaces it with a speech about the government, his mic got cut off right when he started (conspiracy theories abound!). He also brought out El-P, who produced all of R.A.P. Music, to rap his verse on "Butane (Champions Anthem)." Killer Mike and El-P are currently working on a new collaborative project called Run the Jewels (Big Boi's reportedly involved too). You can stream a snippet of a new song from that below.

All song streams, video, and another instagram picture of last night's show, below...

Big Boi & Killer Mike - "In the A" (Shoes For Running Remix) 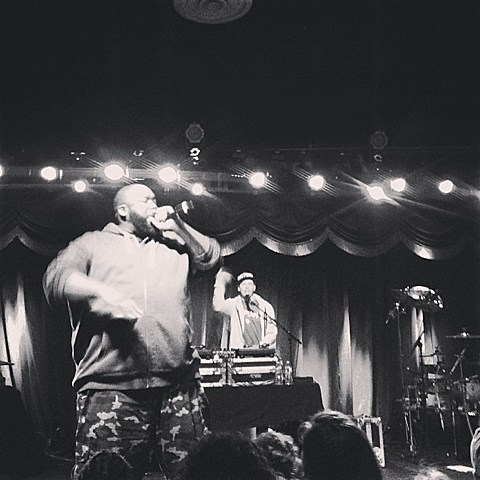