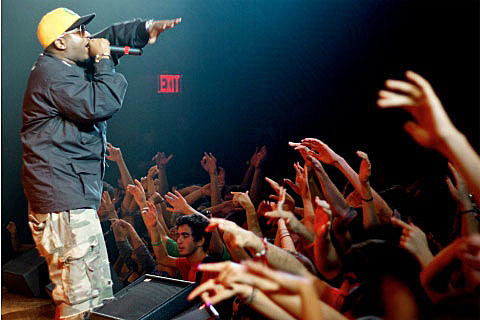 Hip-hop heavyweight Big Boi brought the house down [the other night at Moogfest] with a set of Outkast hits and stand-out tunes from his hot new album, Sir Lucious Left Foot: The Son of Chico Dusty. Highlights of the set included "Rosa Parks," "Ms. Jackson," "So Fresh, So Clean," "Shutterbug" and "General Patton." A powerful live rendition of "Follow Us" featured Kyle Lucas of Vonnegutt singing the hook. And during "The Way You Move," Big Boi invited a group of ladies on stage to dance as he rapped the refrain: "I like the way you move / I love way you move."

While his Outkast collaborator Andre 3000 was missed, Big Boi was backed by a ferocious posse of live musicians and singers that included a drummer, guitarist, horn section and super hot female bass player wearing knee high black leather boots. He was also armed with a gang of choreographed backup dancers and hype-men that added to the visual spectacle.

During the live rendition of "Daddy Fat Sax," the sound turned distressingly towards metal-rap for a moment, but mostly Big Boi rode a deeply funky and danceable Dirty South groove. [Mountain Xpress]

Shout Out Out Out also played Moogfest in North Carolina over the weekend and will be in NYC this week.