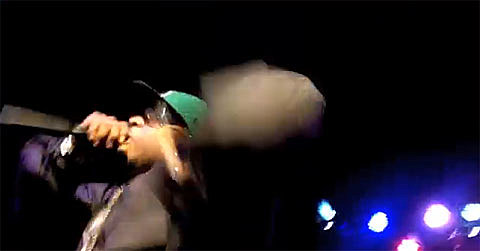 "Yeah. Big Boi was really fun and he played almost all the Outkast and solo hits you could think of... but it was too short, and it really seemed like there should have been an encore. People stood around cheering for like 10 minutes and the house lights went down but, nothin." [panopticon]

Yelawolf headlined the free Fool's Gold 'Day Off' Fest on Labor Day and then later popped up again to join Brooklyn Bowl headliner Big Boi on stage at his sold out, encore-less show last night. Yelawolf appears on the track "You Ain't No DJ" on Big Boi's new album. The official video for that song, and three live clips of other songs Big Boi played at Brooklyn Bowl, can be watched below.

And as reported, Big Boi will play a 2nd NYC show TONIGHT (9/7) for lucky NYU students who will also get a DJ set by The Knocks and a co-headlining live set by Dr. Dog who recently played a public show at Governors Island and who go out on tour with Here We Go Magic in October. The show is the annual NYU "Mystery Concert" (no longer a mystery) and is only open to students.

Big Boi's other upcoming dates include Vegas and Moogfest. Videos below...