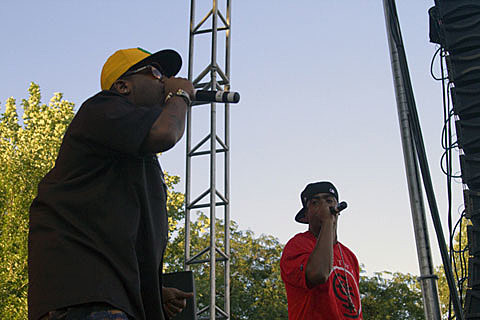 Forget all of that Purple Ribbon All-Star stuff and the fake-me-out "solo album", Sir Lucious Left Foot: The Son of Chico Dusty is Big Boi's first bonafide solo LP and out NOW via Purple Ribbon/Def Jam. Dig on one of those tracks, "Shine Blockas" available for download above.

With the accolades piling on and Big Boi getting more shine than the ropes around his neck, the Outkast-er will play Brooklyn Bowl on September 6th. Tickets go on sale on Friday 8/13 at noon.

The Brooklyn show is one of two Big Boi will play in NYC that week. The second takes place one day later at NYU (details TBA).

Total, Big Boi only has a handful of upcoming dates (that we can find at the moment). One other is a performance at Moogfest which is taking place on Halloween weekend in Asheville, NC...

AC Entertainment is excited to release the (still expanding) lineup of MoogFest 2010! As previously announced, this extraordinary three-day festival, celebrating the innovative vision of sonic pioneer, Robert Moog, will take place Halloween weekend, October 29-31, in Asheville, NC. Costumes are welcome. . . and clearly treats will be in abundance!

The MoogFest 2010 weekend kicks off on Friday with performances by the previously announced MGMT and Big Boi, plus Girl Talk, Panda Bear, RJD2 and others. Artists joining Massive Attack, Thievery Corporation and Jonsi for Saturday at the festival will include Four Tet, Caribou, Emeralds, and Matmos. The festival?s final day will be a Halloween party like none other, with performances by Hot Chip and Pretty Lights topping the bill.

The full Moogfest lineup, all Big Boi dates, and some videso, including a video for Big Boi's "Shutterbugg", below...