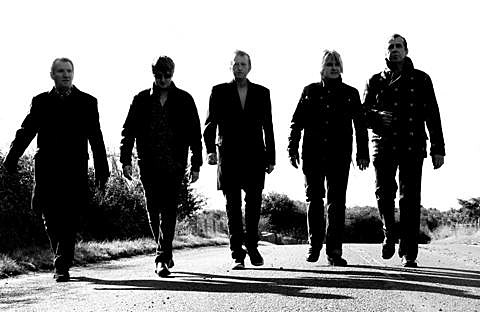 Big Country are known as one-hit-wonders in America with "In a Big Country," from their 1983 debut The Crossing, but had a nearly 20-year run of success in the UK and Europe. America chose U2 but I still listen to those first two Steve Lillywhite-produced albums -- The Crossing and 1984's Steeltown -- which still hold up, '80s drums, bagpipe guitars and karate-chop shouting and all.

Sadly, in 2001, frontman Stuart Adamson committed suicide. As the singer and songwriter for the band, and creator of that signature bagpipe guitar sound (which he did first in The Skids), you would think that would be the end of the band. But then in 2010 the band recruited Mike Peters of The Alarm to sing, and added guitarist Bruce Watson's son, Jamie, to the line-up as well. (If you're going to reform Big Country, Peters is as perfect a replacement as you could hope for.) The band enjoyed the tour so much they started writing new material, and released a new single, "Another Country," reteaming with producer Steve Lillywhite.

Bassist Tony Butler retired from the band last year, breaking up one of the great rhythm sections of the last 30+ years with drummer Mark Brzezicki. But the new lineup will release The Journey on April 16. With this and the band's 30th anniversary, Big Country are also embarking on a North American tour that will hit the NYC area for three shows: Wonder Bar in Asbury Park, NJ on June 6, then Gramercy Theatre on June 7 and The Paramount in Long Island on June 8. Tickets to all three shows are on sale now. While the words "tribute act" come to mind, I must admit part of me wants to go to this. All upcoming tour dates are listed below.

A video of Mike Peters and guitarist Bruce Watson talking about the new record which features some of the new songs, plus some classic Big Country videos, below...