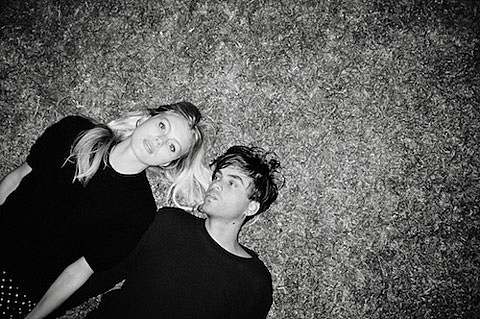 One of 2013's more unheralded albums was June Gloom by UK duo Big Deal. With giant, crunchy riffs, male-female vocals, soaring choruses with just a hint of melancholy, it's a terrific album (it was #26 on my end-of-year-list) and worth investigating. If you remember early-'00s band Joy Zipper, their sound is very similar. (Listen to June Gloom via Rdio.) Big Deal are already back with a new record, the four song Sakura EP, which will be out July 15 via Mute. Alice Costelloe and Kacey Underwood really have a way with melody, mood and texture, as can be heard on "Always Boys" which makes its premiere in this post. Stream it below.

The band (whose photo above was taken by Dum Dum Girls bassist / filmmaker Malia James) are on tour in Europe this month and June (hey, come visit this continent soon, ok?) and all dates are listed, along with the song stream, below...