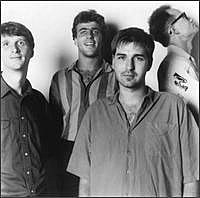 Supercluster: The Big Dipper Anthology is a 3 CD set. 48 tracks re-mastered from the original tapes, plus a video, all for an incredibly low price. Extensive liner notes are included, with background and history provided by the band themselves, as well as exclusive liner notes from Tom Scharpling, who famously set out on a crusade to get the band back together for his “Best Show on WFMU” in 2004. [Merge]

I previously mentioned this release (out March 18, 2008), but that was before they announced tour dates....

Tickets are on sale for all three shows.