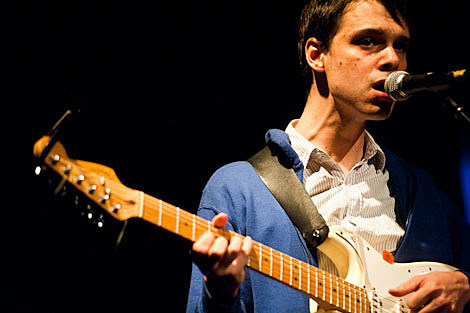 The final lineup for Big Ears Festival in Knoxville TN, March 26-28, has been confirmed and updated, with the addition of King Crimson's Adrian Belew, tape composer William Basinski, NYC metal Liturgy (who are also playing MtyMx), UK avant-noisemakers Konk Pack, punk band Abe Vigoda, Ches Smith (drummer for Marc Ribot and others who'll play with Tery Riley) and Sufjan Stevens, who will be appearing with Clogs.

Also joining Clogs on stage will be the other guest vocalists on their new song cycle/album ,The Creatures in the Garden of Lady Walton: Shara Worden (My Brightest Diamond) and The National's Matt Berninger and Aaron Dessner. They'll be performing that work. A new track from the album, featuring Sufjan Padma on vocals, is posted above.

Other pairings at the fest include Ben Frost and Tim Hecker (collaborating for the first time) and Bang on a Can All-Stars, who will be playing music by David Longstreth, Thurston Moore, Michael Gordon and their own Evan Ziporyn. They'll also be doing a rendition of Brian Eno's Music for Airports at a show with Tim Hecker and The Books (who are also on the bill of ATP NY this year). Tickets to most Big Ears shows are currently on sale; additional shows go on sale Friday at 10am and noon.

Bang on a Can All-Stars will be performing the music of Dave Longstreth next Wednesday, February 24th at their show at Merkin Hall. At the gig, they'll also premiere work by Nik Bärtsch, Oscar Bettison and Christine Southworth plus "performances of a recently commissioned work by Michael Nyman for a film by the celebrated 1920s New York photographer Paul Strand along with a selection from the group's acclaimed live arrangement of Brian Eno's ambient classic Music for Airports." Tickets are on sale. A video of them playing 2x5 directed by Steve Reich is below. The full Merkin Hall schedule for their New Sounds/Contemporary Contexts series (including a May 27th Signal show/Nico Muhly premiere) is below.

Sufjan Stevens along with Matt Berninger and Aaron Dessner of The National and Shara Worden (My Brightest Diamond) will be joining Clogs in their performance of the new song cycle The Creatures in the Garden of Lady Walton. Big Ears 2010 will feature the only live performance of the piece currently scheduled with all of the guest vocalists from the recording, which is slated to be released in early March.

Electronic ambient composer Tim Hecker will be collaborating for the first time with composer/ performer Ben Frost, each of whom will also be performing separately during the weekend.

The Bang on a Can All-Stars will perform a program of pieces written for them by the Dirty Projector's Dave Longstreth and Thurston Moore as well as Michael Gordon and Evan Ziporyn.

In addition, Bang on a Can will perform Brian Eno's Music for Airports in a special show with the Books and Tim Hecker.

Aritst-in-residence Terry Riley's series of programs during the festival weekend will also feature some rarely heard work. Riley will perform a concert on the extraordinary new pipe organ at the University of Tennessee's Cox Auditorium, presenting music commissioned in 2008 by the LA Philharmonic to christen the pipe organ at Disney Hall. This will mark the first time that the program has been presented outside of Los Angeles. Riley will also perform his rarely heard recent work, Autodreamographical Tales, with the Bang on a Can All-Stars, prior to a performance of his legendary masterwork, In C, with an all-star cast of festival performers. In addition, Riley will perform other solo work as well as with his quartet, featuring electric violin virtuoso Tracy Silverman, guitarist Gyan Riley, and drummer Ches Smith (of Secret Chiefs 3 and Marc Ribot's Ceramic Dog). The Calder Quartet will also present a program of Riley's string quartets as well.

The Big Ears Festival also marks a couple of other exciting "firsts":

It will be the first time the Dutch punk anarchists The Ex have ever performed south of the Mason Dixon line in their 30 year history...and the festival finale will feature the long-awaited return of the National, who will debut new material from their much anticipated new album to be released in May.

Thursday, May 20, 2010 at 7:30 pm
New Songs: Elizabeth and the Catapult and Ed Pastorini
A special edition of WNYC's New Sounds Live with host John Schaefer
This program explores new approaches to the art song, a form perfected by Schubert and usually restricted to piano and voice. Today, the art song is being stretched and reshaped by rock, jazz and minimalism. The concert features a commissioned work from Elizabeth and the Catapult (pianist Elizabeth Ziman, guitarist Pete Lalish and drummer Danny Molad). The threesome's unique blend of pop playfulness and grown-up introspection along with their energetic, surprise-filled live shows have made them a favorite on New York's downtown club scene. The program also includes a set by singer/pianist Ed Pastorini.

Thursday, May 27, 2010 at 7:30 pm
SIGNAL
Brad Lubman, Conductor
Part of Merkin's Contemporary Contexts series
SIGNAL, a large ensemble comprised of some of New York's most gifted and innovative musicians, will perform the WORLD PREMIERE of a new work by the brilliant young composer Nico Muhly--celebrated as "one of the next great hopes for the future of classical music" by New York Magazine--commissioned by Merkin Concert Hall. Muhly has worked with Philip Glass, Björk and Antony and the Johnsons and composed the score for the 2008 film The Reader. The program also includes the U.S. PREMIERE of The Corridor by Sir Harrison Birtwistle, one of the most prominent figures in European contemporary music. This piece for two singers and an ensemble explores the climax of the Orpheus myth: his fatal glance back at Eurydice.