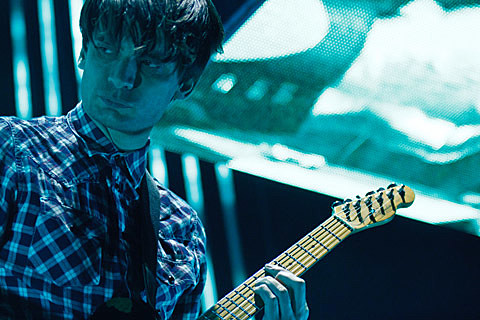 Knoxville, TN's Big Ears Festival goes down March 28 - 30, mixing modern composers and adventurous rock acts. The fest has expanded its programming since we last posted. Radiohead guitarist Jonny Greenwood, already slated to perform Steve Reich's "Electric Counterpoint" on March 30, will now also play the day before (3/29), performing selections from his scores to There Will Be Blood, The Master, and Norwegian Wood, accompanied by Wordless Music Orchestra.

So Percussion will perform all three days of the festival: collaborating with Buke & Gase and Wilco's Glenn Kotche on 3/28; performing Steve Reich's "Drumming" with guests on 3/29; and on 3/30 will perform Bryce Dessner's "Music for Wood and Strings" with Dessner as part.

The other new addition is pianist/composer Rachel Grimes who will perform with her ensemble on 3/30. These are in addition to previously announced acts John Cale, Body/Head, Television, Colin Stetson, Marc Ribot's Ceramic Dog, Dean Wareham, Low, Oneohtrix Point Never, Julia Holter, not to mention composer Steve Reich who is "Artist-in-Residence" for the fest, and many more. Single day tickets to Big Ears go on sale Friday (2/7) at noon EST and the daily line-ups have been released and are listed below.