one of Big Freedia's dancers @ PS1 (more by Zach Dilgard) 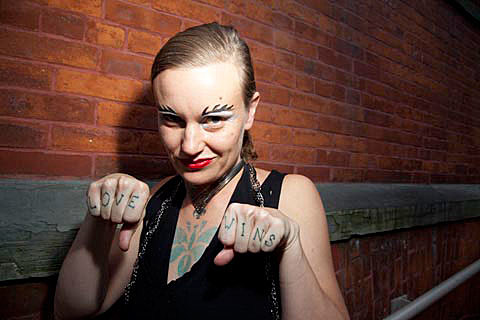 Big Freedia is blowin (bouncin) up. It's been roughly four months since the New Orleans resident was featured prominently in the New York Times Magazine, and she'll be making what is probably her network television debut tonight (9/30) on Last Call With Carson Daly. That's on after Fallon, so unless you stay up all night, set your DVR.

if you happen to be in Miami, well then you can also catch Freedia tonight at Vagabond. It's the next show on an ongoing tour that continues through Pop Montreal (10/3), some dates with Matt & Kim (10/11-10/13), CMJ and Fun Fun Fun Fest.

For CMJ, there are at least two NYC shows, both official, ticketed showcases and both on sale. There's the previously mentioned Windish showcase happening at Santos on October 23rd (tickets), and a show one night earlier at Southpaw with Javelin and Dominique Young Unique (who also plays the Santos show and who also played with Freedia at the final Pool Party of the summer).

And as if Big Freedia shows aren't dirty enough, she recently played one in an actual strip club and there's (NSFW) video footage. That video and all dates below...

BIG FREEDIA @ SASSY'S STRIP CLUB TEASER from Into The Woods on Vimeo.