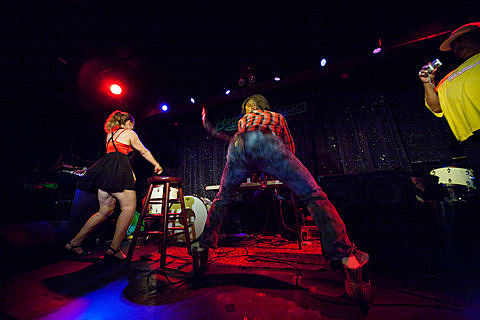 Big Freedia, who is currently on tour, recently appeared on HBO's Treme with fellow New Orleans bouncers Katey Red and Sissy Nobby. Treme takes place in New Orleans where the bounce music Big Freedia has become recognized for originated. She appeared on the Tim Robbin-directed episode two of the second season, "Everything I Do Gonh Be Funky," named after the Allen Toussaint composition of the same name. In the episode, Treme characters Davis and Aunt Mimi watch Big Freedia perform "Gin in My System" at the West Bank Club. Mimi then meets Katey Red in the club during the performance and walks off with her. Watch a clip below. And if you need a refresher on Bounce, read what Treme music consultant Alison Fensterstock has to say about it.

As previously mentioned, Big Freedia is stopping by NYC this week to shake some ass on Thursday (5/26) at Mercury Lounge with her tour-mate Javelin who is not playing the show Saturday (5/28) at Brooklyn Bowl where the billing is "BIG FREEDIA AND THE DIVAS with DJ RUSTY LAZER." Tickets for Mercury Lounge and Brooklyn Bowl are still on sale.

The Saturday night show at Brooklyn Bowl is a late one. The Deli's NYC B.E.A.F. show with Delicate Steve, Headless Horseman and Arpline happens earlier in the evening. The Saturday show is also one night before Freedia appears at B.O.M.B. Fest.

In June Freedia hits Chaos in Tejas in Austin. In July she was supposed to play some dates with Quintron, but Quintron's entire tour is now cancelled. All Big Freedia tour dates and videos below...

Big Freedia, Katey Red, and Sissy Nobby in the trailer on the set