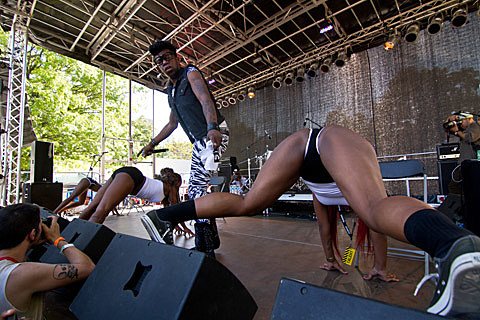 She was going too far. She's trying to twerk, but don't know how to twerk. It's become offensive to a lot of people who've been twerking and shaking their asses for years, especially in the black culture. But it's also helpful because it's putting twerking on the map around the world. I've been transforming twerking for the last three years around the world and for her to just come out of the blue and just start twerking, a lot of people are very offended by it, especially in New Orleans. When something get hot, everybody want to jump on the bandwagon and act like they created it. That's totally understandable but they have to give credit where credit is due.

Miley Cyrus may have put "twerking" into the public lexicon but New Orleans' bounce queen Big Fredia remains the master and authority. To remind everyone of this -- and to maybe also let people know about the new FUSE reality series Big Freedia: Queen of Bounce -- she'll be attempting to break the group twerking record next week in NYC. This goes down on Wednesday (9/25) at noon in Herald Square (34th St @ 6th Ave) where she'll conduct what she hopes is the largest twerking session to ever take place. Want to be a part of it? More information is here.

You may remember that Diplo was set to do the exact same thing at Electric Zoo but the final day (when it was to have happened) got canceled. Big Freedia was here last month for Afro-Punk Fest. Big Freedia: Queen of Bounce will air on FUSE Wednesdays at 11 PM Eastern beginning October 2. Watch a trailer for the series below.