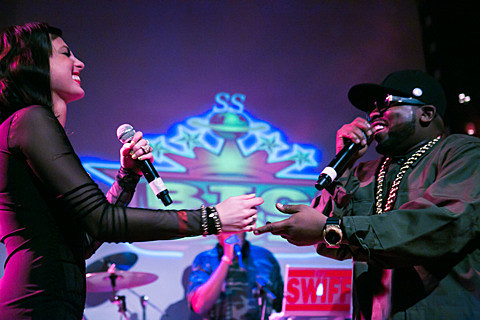 A few years back, OutKast's Big Boi invited Phantogram to contribute to three tracks on his 2012 album, Vicious Lies and Dangerous Rumors (including the especially great "Lines," which also features A$AP Rocky), and their creative relationship eventually led to the full-blown collaborative project Big Grams. They recently released their 7-song self-titled EP, which was produced almost entirely by Phantogram except "Put It On Her" by 9th Wonder and "Drum Machine" by Skrillex, and Big Boi's pals Run the Jewels show up on "Born to Shine." You can check out the video for "Fell in the Sun" and a Spoitfy stream of the whole EP below.

Big Grams have announced some festival appearances for 2016, including Hangout, but before that they'll play a club show at NYC's Irving Plaza on December 21. Tickets for the NYC show go on sale Friday (11/20) at 10 AM with Live Nation/Music Geeks presales starting Thursday (11/19) at 10 AM.