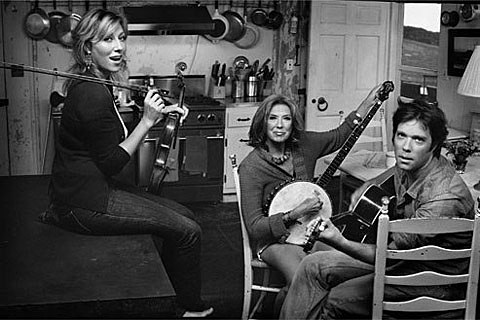 A tribute to Canadian folksinger Kate McGarrigle held at Massey Hall on Friday was more celebratory than sombre, with dozens of her family and peers gathering for a joyful celebration of her unique songwriting... Kate McGarrigle -- one-half of the influential Montreal singing duo with her sister Anna -- died of cancer in January 2010 at the age of 63. On Friday, a lineup including Emmylou Harris, Bruce Cockburn and members of Broken Social Scene offered a mix of straight interpretations and cleverly revised covers featuring flavours of rock, soul and gospel...

Friday's concert marked the third such charity tribute to the folksinger -- with proceeds going to the Kate McGarrigle Fund, created to further sarcoma research -- and like previous shows in London and New York, this was a family affair. -[CTV]

Kate McGarrigle passed in 2010, and the Massey Hall show in Toronto on 6/15 mentioned above featured many members of her family (aka the McGarrigles and Wainwrights. Check out video from a Canadian show that featured Anna McGarrigle, Lily Lanken, Martha Wainwright and Rufus Wainwright performing McGarrigle's songs below.

That leads us to a a bunch of family news. Martha Wainwright will spend every month of the summer surrounded by gallons of wine, as part of her residency at City Winery. Her summer kicks off on June 24th at the venue, and continues with shows on July 25th and August 15th. Tickets are on sale for all three.

Meanwhile, Rufus Wainwright -- whose song "Montauk" was just named one of the best "50 Favorite Songs Of 2012 (So Far)" by NPR -- will be spending whatever time this summer not on Montauk out on tour which will stretch into the fall. No NYC show has been announced as of yet but he's hitting the rest of the US and Europe pretty hard. All dates are listed at the bottom of this post.

Videos and a lists of tour dates are below.