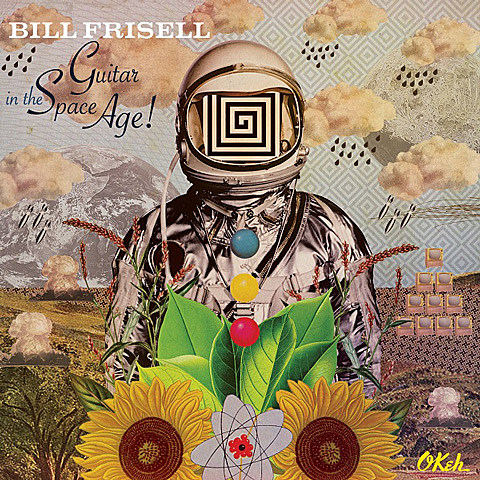 Having just released a new album, Guitar in the Space Age!, and played a few shows with Sam Amidon including one at Music Hall of Williamsburg, six string virtuoso Bill Frisell will be staying busy for the foreseeable future. In addition to touring the new album all over the world, he's got some other interesting things going on here in NYC.

On November 21 he'll be at MoMA with Ron Miles, Tony Scherr, and Kenny Wollesen performing a live score (which Frisell composed) for the film The Great Flood:

The Great Flood is based on actual footage of the powerfully destructive Mississippi river flood of 1927--levees broke in over 100 places, engulfing thousands of square miles--and the revitalization of African American music that evolved as black southerners migrated Northward to escape the devastation. Using previously unseen outtakes from newsreel footage, Morrison reveals a society in the midst of a cultural, political and ecological upheaval. Guitarist Bill Frisell's score embodies the catastrophic events, and serves as the emotional narrator of the film.

The role of music in classic film and television has always been considerable. With When You Wish Upon a Star, the ever-versatile guitarist Bill Frisell draws upon the sentimentality of music heard on screen and how it shapes and informs our emotional relationships to what we see.

Violist Eyvind Kang, bassist Thomas Morgan, drummer Rudy Royston, and singer/violinist Petra Haden will join Frisell for his interpretations of classics like "When You Wish Upon a Star," "Alfie," and "Moon River." Tickets are on sale now.

The famed Highway 61 travels alongside the Mississippi River, from the birthplace of jazz in New Orleans to the birthplace of guitarist Bill Frisell's Swedish-American father in Two Harbors, Minnesota. Frisell, along with pianist Craig Taborn, trumpeter Ron Miles, saxophonist Greg Osby, and drummer Kenny Wollesen, embarks on a musical journey along the revered route, which Bob Dylan famously immortalized in 1965. They will revisit the Dixieland jazz of Davenport, Iowa native Bix Beiderbecke, the respective soul music and rock sound of Memphis-based Stax Records and Sun Records, and the Delta Blues of Mississippi. Join us for a profoundly historic sojourn realized by Frisell through this unique embodiment of the American musical landscape.

Tickets to those shows are on sale as well.

All Bill Frisell tour dates are listed, along with an Rdio stream of Guitar in the Space Age!, below...