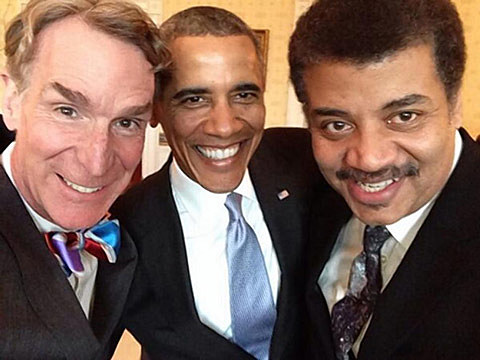 With his quirky/funny '90s-era afternoon PBS show, Bill Nye "the Science Guy" taught a lot of us about the world around us and beyond. He's been back in the news lately, debating creationist Ken Ham back in February, hanging with Cosmos/Star Talk host Neil deGrasse Tyson and President Obama, and currently shopping around a demo reel of a new TV show pitch. It would be great to have him back on television.

In the meantime, Bill Nye will be in NYC this summer for three lectures at Iriving Plaza on July 18, 19 & 20. Bill says in a short teaser video, "I'll be talking about you and me. Humankind. I'll be talking about evolution. And energy, and the cosmos and places within it, and our place in space." Bill says also it will be funny. Tickets are on sale Friday (4/11) at 10 AM with a Live Nation and Music Geeks presale (password is "music geeks") beginning Thursday (4/10) at 10 AM.

Check out that teaser video, the debate with Ham, and a few clips from his '90s show below...