photo: Philadelphia during Made In America 2013 (more by Dana (distortion) Yavin) 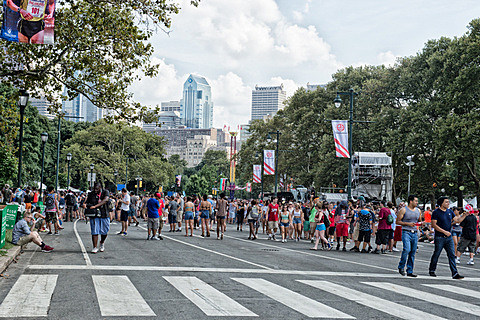 As Billy Penn reports, Philadelphia City councilman Mark Squilla has proposed a bill that would "require owners of nightclubs, cabarets, bars and restaurants in the city to collect the names, addresses, and phone numbers of entertainers -- bands, rappers and DJs -- in a registry, and to share that personal information with police upon request."

The article points out that no specific incident has been named as the reason for this, but Councilwoman Maria Quiñones-Sanchez said some artists "have been known to have created incidents and violence at their previous acts." And as Billy Penn points out, this comes just months after a fatal shooting outside of a Lil Durk show in Philly.

R5 Productions owner Sean Agnew does not sound very happy about this:

"This is news to me. I'm not sure what the reasoning or theory is. As someone who books 600+ shows a year, I have never once received an artist's home address or phone number. It's all through booking agents, managers, publicists," Agnew told Billy Penn. "There is a firewall in place with the artists. I can't imagine a band's representatives wanting to give their clients information over to the police without a really good reason."

He also adds, "I'm just trying to think of a situation where the police want the addresses and numbers of the 10+ members of Arcade Fire. Seems really intense."

A bunch of Philly artists, including The Districts, Tunji Ige, The Early November and Cayetana, have been passing this Change.org petition around the internet to get the bill denied. The petition reads:

The recent bill (#160016) to amend the "Special Assembly Occupancies" section of the Philadelphia Code poses a serious threat to Philadelphia's vast and thriving music scene. Please don't underestimate the number and variety of people this bill would hurt. If passed, this bill will have a serious chilling effect; not only on the musicians that call this city home, but also on the thousands of touring acts who visit the city every year (and bring in thousands of dollars in revenue).

Additionally, there is no reason for the Philadelphia Police to possess a registry containing the personal information of thousands of people, simply because they are musicians. Not only is it unnecessary and likely to cause a massive administrative backlog, it's a gross violation of our civil liberties. Philadelphia is currently one of the best cities in the country for live music-this bill would make it one of the worst. We call on City Council to reject this dangerous, costly, and unnecessary bill, and to continue to protect the civil rights of its residents.