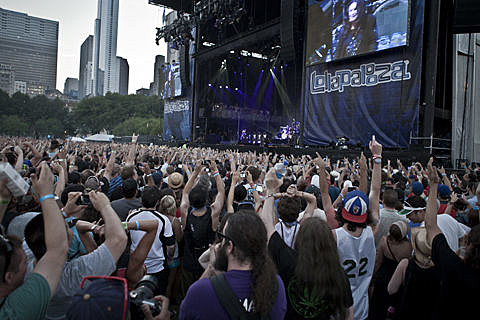 Following Bill Ward's 2012 statement on his absence from the Black Sabbath reunion (which does include original members Ozzy Osbourne, Tony Iommi, and Geezer Butler), Bill just recently commented further on some of his reasons for this. In an interview this week with Guitar International (via Metal Hammer), Bill said:

I was offered a contact and I couldn't sign it. As for some of the stories - I would never, ever show up for a commitment that I could not do physically. So that should answer that one! In the statement that I did last year, I was quite clear that I came to the end of the road and promised myself and my family that I would never sign a contract that was not workable.

It was one of the toughest decisions that I ever had to make. Because I absolutely and without question wanted to play. I haven't left the band. Everybody thinks I have left the band. I didn't walk out; it wasn't like that at all! I just didn't sign the contact and life took its own course.

Writer: I got to ask about Bill Ward, and I wonder when is the last time you spoke to him and what would you say are the odds that he'll be back into the fold in the near term?

Ozzy Osbourne: We would love to have Bill back in the fold, but unfortunately it didn't work out and we knew we had to deliver an album because we had kept people waiting for like 35 years, so we all just got on the boat and unfortunately, Bill had some discrepancy about something or other, but we'd love to have him back and work something out.

Writer: Have you spoken to him since negotiations broke down?

Ozzy Osbourne: No. I've been so busy doing this project and working in the studio, we just couldn't stop. I wish him no harm. I still love him a lot. We all do. You know, it'd be great to have him back, but we felt if we pull the plug on this one people would have gone oh, it's never going to happen, you know. Because we tried, and we were speaking about it for a long time.

The Bill Ward-less Black Sabbath are currently on tour with Andrew WK (DJ) in support of their reunion album, 13, and that tour rolls through NJ this weekend for a PNC Bank Arts Center show (8/4) on Sunday, and then hits CT's Mohegan Sun Arena on Thursday (8/8). Tickets appear sold out for NJ, but there's a few left for CT.

Updated dates are listed, along with the video for "God Is Dead?" from 13, below...

Andrew WK DJing on all dates