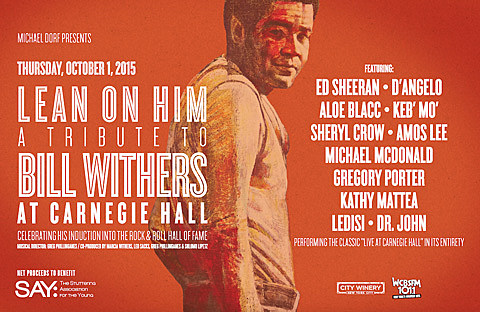 Soul legend Bill Withers was inducted into the Rock and Roll Hall of Fame this year, will continued to be honored when a host of big names pay tribute to him at a concert at NYC's Carnegie Hall on October 1. This is one of the Michael Dorf Presents "Music Of" tribute shows and participating artists include D'Angelo, Dr. John, Michael McDonald, Aloe Blacc, Sheryl Crow, Amos Lee, Keb' Mo', Gregory Porter, Ed Sheeran, Kathy Mattea, Ledisi and more to be announced. They'll be performing Withers' 1973 Live At Carnegie Hall album in full. (Stream the original via Spotify below.) Tickets are on sale now and proceeds will go to Stuttering Association for the Young (Withers has stuttered since childhood). There are also VIP packages available as well.

Withers himself will make an appearance at the concert, though whether he'll sing remains to be seen. Now 77, he did not sing at the Rock and Roll Hall of Fame induction ceremony earlier this year -- Stevie Wonder, who introduced him, did however perform Withers' classic "Ain't No Sunshine." You can watch video of that below as well.