a day by day Week in Indie-like guide to this week's Northside Festival... 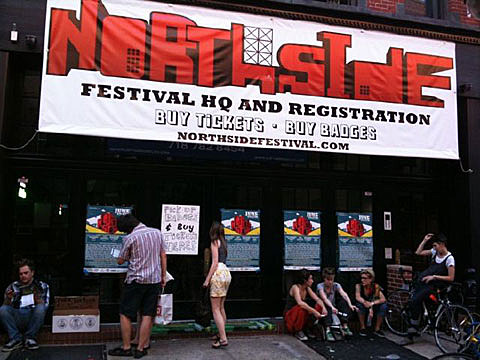 When I was looking at the full Friday Northside Festival schedule, I was a bit overwhelmed by the embarrassment of riches available to indie rock fans tonight. I felt like writing "Basically just go anywhere tonight and you're going to run into a good show." Which is mostly true. If you have a badge, you can flit between venues and make up your own killer bill.

Some of these shows are going to be crowded though. Like I bet Glasslands will be packed out the wazoo for Tame Impala, so if that's one you're interested in you might just want to plant yourself there early (advanced tickets are sold out). Do they have air conditioning at Glasslands yet? It might get so hot in there you'll start seeing things, which would go well with those Aussies' rhythm-heavy psych rock.

You could also go to Death By Audio (which does have A/C, and now two working bathrooms) for a rock-solid bill of guitar-centric bands brought to us by Less Artists More Condos. The lineup includes voluminous duo Sisters and their giant stack of amps; the under-appreciated and poppy Darlings; skilled noise merchants Grooms; and art punks Regal Degal who I definitely think are a "band to watch." 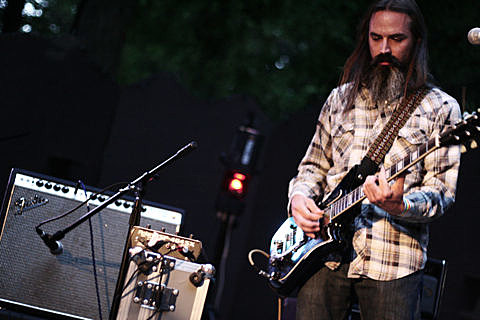 Moving away from the corner of S. 1st and Kent, the Woodsist Showcase at Music Hall of Williamsburg is kind of a no-brainer. That said, headliners Woods and Real Estate play all the time here. I say go early for the San Francisco triple threat of Moon Duo, Sic Alps and The Fresh & Onlys, then skip off to something else.

Moon Duo, an offshoot of Wooden Shjips, play two chord (at most) psych-drone not unlike Spacemen 3 or Loop. I saw them the last night of SXSW when I was cold and tired, not the state of mind I'd recommend experiencing them. Not that the cold part will be an issue in this weather. There's not a lot to watch, so maybe locate a seat upstairs and bliss out.

Sic Alps are back to a duo after a short stint with Ty Segall on drums.  They haven't released anything in a year -- a long time for what was a pretty prolific band -- but that shouldn't hamper their live show, usually powered by a Jenga-like monolith stack of amps in the center of the stage. Their sound is thick and sludgy, but carefully prepared. It feels like a bog in July -- in a good way.

And I'm really looking forward to hearing The Fresh & Onlys with MHoW's sound system. While many of their many recordings have been decidedly lo-fi, these guys can really play and I think it's time they shake loose the "garage rock" tag that never really fit them in the first place. This is pop music. They are really a case of the whole adding up to more than their parts -- the whole band is great -- but if you go tonight, be sure to watch lead guitarist Wymond Miles. The guy is a genius and has a rack of pedals that would impress Kevin Shields. The sounds he gets deserve high fidelity. As do their great songs. I'm a huge fan, is it obvious?

Down the street from MHoW, at Cameo Gallery: Kanine Records, Wao Wao Records & Insound are presenting another great lineup under the venue's psychedelic Snuffelupagus. There's a bunch of really good locals (Dream Diary, Grooms, We Are Country Mice) but you might want to swing by to catch Roanoke, VA's Eternal Summers who really impressed me when I saw them at Glasslands a couple months ago. Also: If you like the Pastels, Field Mice and all things indiepop, Dream Diary are your new favorite band if they haven't attained that already.

Madison of Dream Diary is pulling double duty tonight, as she is half of Coasting who'll play at Matchless as part of a bill curated by Georgia of blog Microphone Memory Emotion. Coasting's debut 7" is worth picking up, and if you're lucky you'll get a copy printed on lavender vinyl. Also playing are Family Portrait, Fluffy Lumbers and Bermuda Bonnie.

Over at Coco 66, there's a benefit for 826NYC (badges are accepted despite it being a benefit) with Sondre Lerche and Oberhoffer, plus a reading from author Shalom Auslander. Sondre usually plays MHoW or Bowery Ballroom these days, so to see him in such a small venue will be a treat. Anyone who's seen him before knows what a charmer -- and tunesmith -- he is. Plus, there's up-and-comers Oberhoffer who I wouldn't be surprised if they're playing much bigger venues very soon. Also there's an open vodka bar at 8PM.

Meanwhile at Union Pool, there's an early show (doors at 7PM) that features my new favorite band on Captured Tracks, MINKS. They've only got a single out so far, the Cure-esque "Funeral Song," which doesn't really represent what they do live. The six piece performing MINKS do have some Cure/New Order tendencies, but I'd say Felt is probably just as strong an influence, with clean jangly guitars and jazzy arrangements. Both times I've seen them live, my only complaint has been they didn't play long enough. Not sure of set time for MINKS, but there's not a lot else going on then, you can hang in the backyard of Union Pool and get some tacos from the El Diablo truck to recharge for the night ahead.

That seems like plenty for one night. A video from one of Tame Impala's sets at Pianos last night, below...