a day by day Week in Indie-like guide to this week's Northside Festival...

The Hundred in the Hands 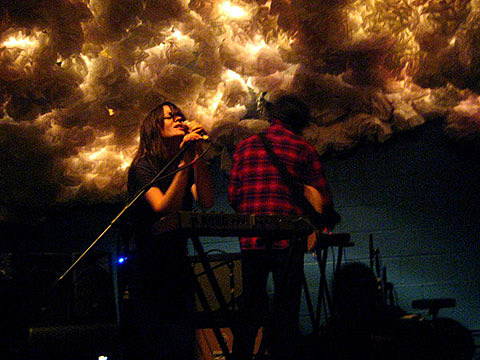 The Northside Festival is back for a second year, and I really do think the roster of bands playing over the next four days is pretty impressive: here's bigger bands, more out of town bands, more bands in general. More than plenty of good -- great even -- options to justify the $50 badge. (Most of us spend $50 in four days here anyway.) The bulk of the venues are within walking distance of each other, so why not make good use of the badge and hop around as much as possible.

For opening night (tonight, Thursday, June 24th), if you had to stay in one place the whole night, it's hard to top the line-up at Knitting Factory with DOM, Cloud Nothings and Wavves. It's sold out for tickets, but you can still get in with your badge as capacity allows. Wavves new album, King of the Beach, is going to surprise people expecting Nathan Williams to do more of the same lo-fi haze -- it's a ridiculously catchy set of tunes that drops the sludge and scuzz of his first two releases. Cleveland's Cloud Nothings are good too, much more rockin' live than their recordings might suggest, with a real basher of a drummer. I've yet to see Dom live, maybe tonight's the night. Dom also plays our showcase at MHOW on Saturday night.

Former Bell House/Union Hall booker Jack "Skippy" McFadden (along with the Gothamist folks) has put together a solid schedule of local talent at Coco66, with '90s-loving Mr. Dream, plus Pacific Theater, The Forms, Caveman, Bird of Youth, Luke Folger.

Elsewhere: The Hundred in the Hands are at Warsaw (10PM), opening for Au Revoir Simone (who have a new remix album coming out). THitH's new EP, This Desert, will appeal to folks who liked the dancier side of '90s shoegaze (Curve specifically comes to mind).

Austin's YellowFever, in town for the Voxtrot farewell shows, play Union Pool at 10:45PM. If you've never seen them, please try and correct that. It's a solid show overall, with Air Waves, Aa, Coasting and PC Worship.

ARMS, which is former Harlem Shakes guitarist Tom Goldstein's new band, >play their harmony-laden atmospheric pop at Bar Matchless at 10:30pm. If you miss them, they're also at Barge Park on Sunday.

And it should be a sloppy drunk night down in The Charleston's basement with My Teenage Stride, I'm Turning Into (2/3's of which are also in MTS, and they curated this show) and German Measles.

The full schedule is at Northside's site. More Northside suggestions as the weekend progresses. Stay tuned.

The Hundred In The Hands's new video for "Tom Tom" below...

The Hundred In The Hands - Tom Tom