I saw upwards of 50 bands during the four days of SXSW. These were the most memorable. I think. 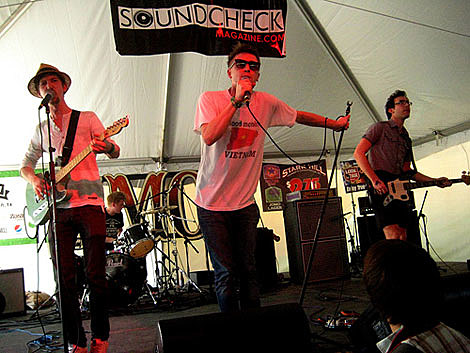 Easily the best band I saw at SxSW this year. Of course, as their album Little Death made my Best of 2008, I already had a predilection to like them but Pete and the Pirates so nailed their great songs live -- the harmonies, the guitar interplay, everything -- that I just had a big grin on my face the whole time. My only regret: not seeing them more than once. 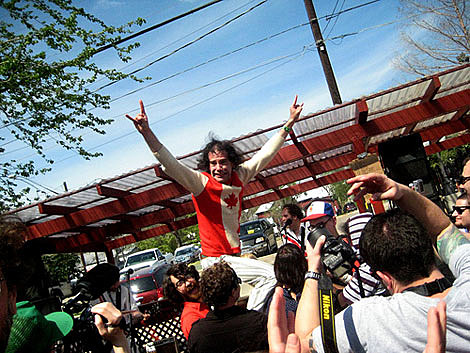 One of the amazing things about Austin during SXSW is there are so many day shows, you can stumble into something great by accident. After a botched attempt to catch L.A.'s Blue Jungle, I wandered past Ms Bea's, where Todd P and Woodsist were throwing an all-day party, just as Vancouver punk legends The Evaporators were starting. This is Nardwuar's band, by the way, and if you're only familiar with his celebrity interviews you should see him front a band. Of the many crazy moments, Nardwuar gathers the crowd to catch him as he stage dives, and then "drives" this bed of people around Ms Bea's patio. (I shot video of it, it's at the bottom of this post.) The most genuinely fun show of the week. 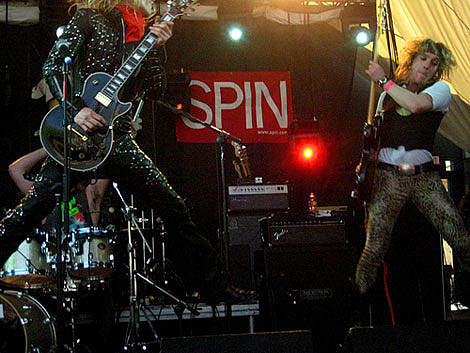 On a similar yet entirely different note, Justin Hawkins mounted a roadie's shoulders for Hot Leg's final song, "Cocktails," and rode him through the audience while playing a guitar solo. It's a stunt Hawkins also did in his old band, The Darkness (whose first album I still listen to regularly), but it actually seems more appropriate here with the even more over-the-top Hot Leg. Where the Darkness were more Thin Lizzy, Hot Leg is the Sunset Strip circa 1986, complete with hairspray, makeup, and a studded leather jumpsuit. And posing. Every second of their performance was a photo op. That said, the band are tight and can really play all that stuff live. The songs, unfortunately, are a little to jokey this time around, even for Hawkins who wrote a love song to a genital wart. But as live spectacle, Hot Leg are something else. (Video below from a different SXSW show.) 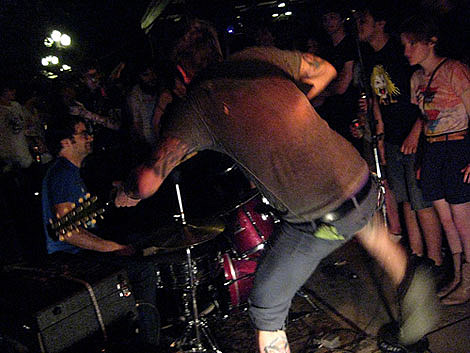 It was kind of hard to leave the Todd P/Woodsist party on Saturday as the line-up was just so solid - like San Francisco's Thee Oh Sees, leaders of the Bay Area's scene that also includes Sic Alps, Ty Segal, and newcomers The Fresh & Onlys. Everything is drenched in buckets of reverb and echo. Frontman John Dwyer is an intense dude, a "mike-eater" and prone to abusing his 12-string guitar that miraculously never seems to go out of tune. Great songs too. Thee Oh Sees will be in NYC on April 4 - 5, don't miss em. (Video below) 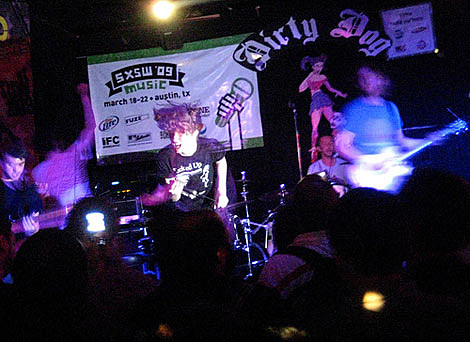 Glaswegians with a ridiculous name, but what a performance. Kind of like the Mae Shi or Los Campesinos!, with lots of shouted choruses and clapping, Dananananackroyd just want to spread the love. Two singers: one of whom spends half the time on a second drumkit; the spends half the time in the audience. The latter finishes the show by hugging nearly everyone in the crowd individually. Doug from Sky Larkin claims they're the best live band in the UK. And I can understand his reasoning. (Video below) 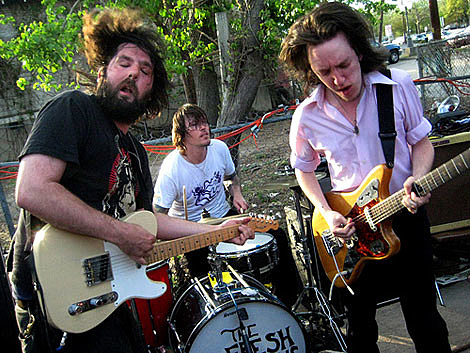 One of many bands doing only unofficial shows, I was unaware the Fresh & Onlys were in Austin at all until I saw them on the hand-scrawled schedule stapled to the gazebo/performance space at Ms Bea's. Like a less-intense, more melodic Oh Sees, the Fresh & Onlys crank through a great set of harmony-laden garage and psych, despite some technical problems, like the bassist's strap malfunction that had him playing laying on the ground for a few songs. The band has a 7" out now on Kelley Stoltz's new label, Chuffed, and are releasing two albums this year: one soon on John Dwyer's Castle Face, and one later in 2009 on Woodsist. (Video from their show below.) 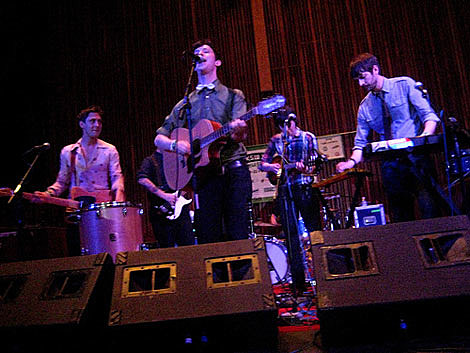 I was already a massive fan but the band's delicate and swooning tendencies were amplified by the church's natural acoustics. If you ever have a chance to see Fanfarlo somewhere like this, don't pass it up. 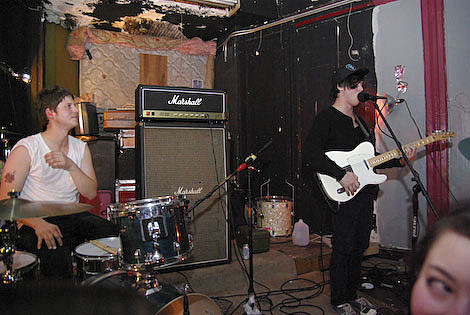 Easily one of the most insane shows of the week. By this point in the evening there are proably 2000 people at Ms Beas: the patio, the parking lots behind band beside the place, in the bar, etc. And most seem PSYCHED to see WAVVES. The crowd goes apeshit. There is a mosh pit made up, seemingly, entirely of hot girls. Crowd surfing in the gazebo. People in trees, hanging from the rafters. Their records are distortion-fests but live you can really hear the songs, even when standing behind the band watching the mayhem in front of them. (A couple of pics in my last TWII post, Video below)

editor's note: the WAVVES show I saw at Emo's on Wednesday afternoon was nothing like that - it was ok because I knew a bunch of the songs, but overall nothing crazy with the large crowd just standing around. 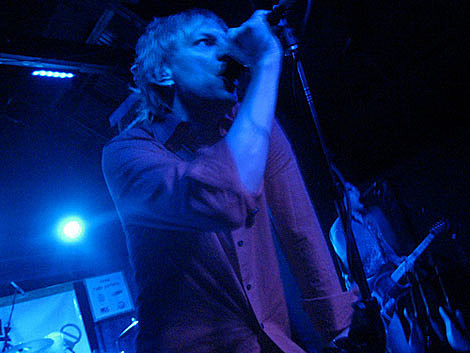 There's always one band at SXSW that makes you do a double-take when you see them on the schedule. For me it was That Petrol Emotion, who were popular in the late '80s (on college radio at least) and broke up in 1994. They were the band 4/5s of The Undertones formed when Feargal Sharkey left in 1983, recruiting Seattleite Steve Mack for vocals. The crowd to see them at 1AM was sparse, but included Bell House / Union Hall booker Skippy, Britt Daniel and Andrew Bird. Sound was a bit of a mess, but the band played great - Steve Mack was still manic as ever, and they played my favorite TPE song, "It's a Good Thing." (Video below.)

Melding all sorts of influences ('90s indie rock, '80s Flying Nun, '60s baroque/psyche), Italy's A Classic Education make music that seems tailor-made to my tastes, but they are genuinely a joy to watch. Singer Jonathan Clancy is clearly a big music nerd, knows his influences but is a good songwriter too, and the band are just tight enough while retaining a bit of shambolic charm. Hopefully they'll come back to the States soon. (Video below.)