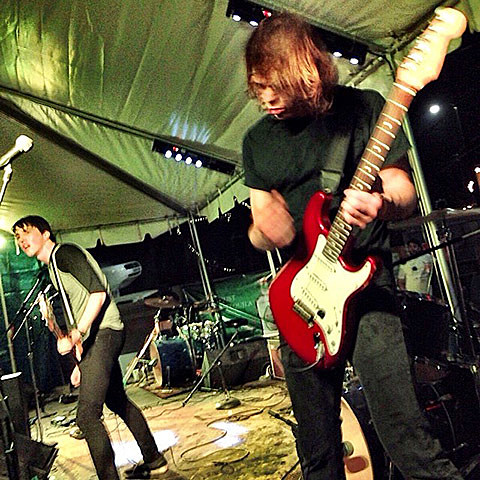 I'm not sure how many artists I saw over the course of five days at SXSW but it was a lot. My week started (Kelley Stoltz) and ended (La Luz) at Hotel Vegas which was probably my favorite place to see bands in Austin. In between I tried to catch everyone on my list, and luckily quite a few of them played our day parties at Red 7. So of these, many were expected, but there were a couple nice finds too. Here's my Top 10 artists I caught at SXSW:

Jarvis Cocker (Wednesday @ Austin Convention Center)
I missed Jarvis and (Pulp guitarist) Steve Mackey's "Desperate Sound System" DJ night on Tuesday (and didn't get to see the Pulp documentary) but I did happen into Jarvis' talk, titled "Extra Ordinary," at the Convention Center the next day. It was an hour-long discussion -- complete with PowerPoint presentations -- that framed his lyrical style of finding beauty (and humor) in the mundane. As you would expect, it was witty, urbane and nobody wanted it to end.

Hospitality (Thursday, Merge Showcase @ The Parish)
I didn't really intend on seeing Hospitality (a band I've seen many times, but not since their new LP) at SXSW but the hour they were playing was free on my schedule...and I'm so glad I did. Not only did the songs off Trouble sound great, but the band took their expanded musical palette to the songs off their debut, offering up radical reworkings that made their whole set fresh and exciting.

Sylvan Esso (Thursday @ BV day party and Chevrolet Courtyard)
A real suprise, as I am against laptop acts in general, Sylvan Esso really made it work. A good set of songs anchored things, but it was the stage presence and chemistry between singer Amelia Randall Meath and beatmaker Nicholas Sanborn. One of the few times my first thought wasn't "get a live drummer" though, now that you mention it, that wouldn't hurt. 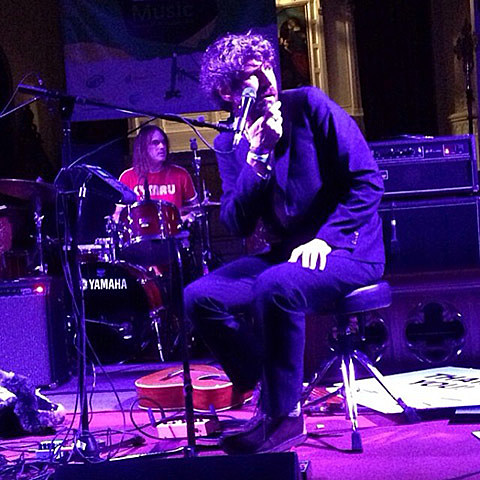 Gruff Rhys (Thursday @ St. David's Historic Sanctuary & BV Friday Day Party)
One of the true talents of the last 20 years, Gruff Rhys could probably read the SXSW schedule and make it entertaining. At the church (and at our Friday day party), he previewed his new album, American Interior, which is a high-concept project that involves a book, film and mobile app. It worked with just an acoustic guitar (and a few handmade signs) too.

La Femme (BV Friday day party @ Red 7)
As they made my #3 album of 2013, I knew I was going to like La Femme live. I didn't expect them to be so genuinely awesome, especially in the tough noon opening slot. They sounded great, oozed Frenchiness, were a blast to watch. Expectations way exceeded. I can't wait to see them do a full set on Sunday (which BV is presenting).

Pains of Being Pure at Heart (Friday @ Chevrolet Courtyard & BV Saturday day party)
No disrespect to the TPOBPAH line-up that made the band's first two albums, but the all new version of band Kip Berman has put together -- including Drew Citron of Beverly, Jen Goma of ASDIG, and Dream Diary's Jacob Danish Sloan -- are seriously talented. And the Pains were never this much fun before. New record's really good, too.

Protomartyr (BV Saturday Day Party @ Red 7)
Dressed in grey Dockers and a button-down shirt, Protomartyr frontman Joe Casey looked like he was performing our day party slot on his lunch break. He kept one hand in his pocket, chewed gum and barely moved. But not unlike Mark E. Smith or David Thomas, there's a seething indifference seeping out of that shirt collar, and to me that dichotomy -- and the general badassedness songs on Protomartyr's new album -- was about as punk as it gets.

Fat White Family (BV Saturday day party)
Another of the bands I was most excited to see, Fat White Family brought a genuine sleezy rock n' roll attitude. Most of bandmembers were shirtless and sweaty by the second song, and frontman Lias Saoudi had an undeniable louche...is charm the right word? These are boys you don't bring home to mom. You can catch them this weekend in NYC. 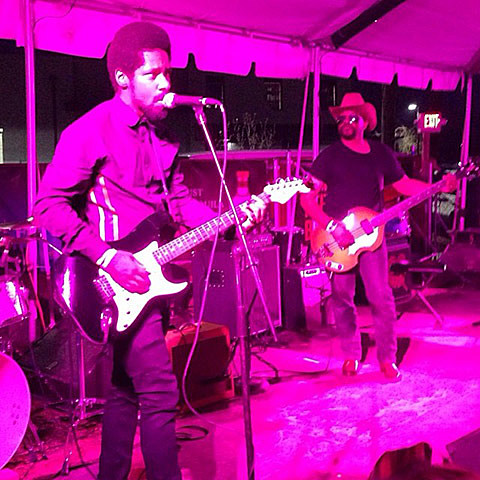 Curtis Harding (Saturday, Burgermania @ Hotel Vegas)
Burgermania boasted some 60 bands across Hotel Vegas' four stages, with a new group starting every 15 minutes. Most of them being on the Fullerton, CA record label that was as much the star as the bands. (Their t-shirt booth, sporting about 10 styles, sold out of everything except XXLs.) I think I caught about 15 over the course of four hours. I arrived in time for the soul-garage of Atlanta's Curtis Harding, whose magnetism, pipes and chops were evident from note one. Look for his album on Burger later this year.

Bad Sports (Burgermania @ Hotel Vegas)
Having enjoyed all three albums by Bad Sports a lot (very Damned/Buzzcocks-style punk), I somehow never realized the band was fronted by OBN III's Orville Neeley until I saw them on stage as part of Burgermania. Having only seen Neeley in wildman OBN mode, it was cool to see him channel that energy into a guitar, ripping out one burner after another.

A few more Instagrams (including a few bands that fell outside the Top 10) below... 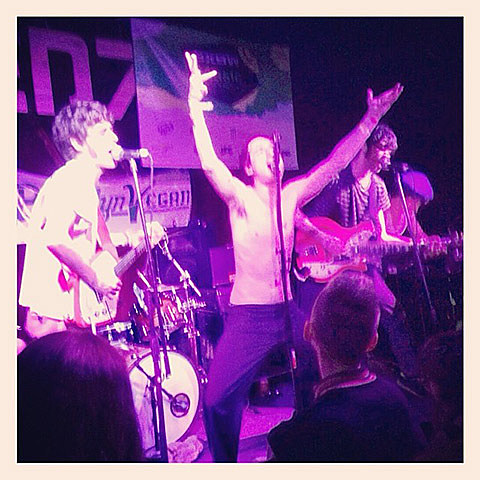 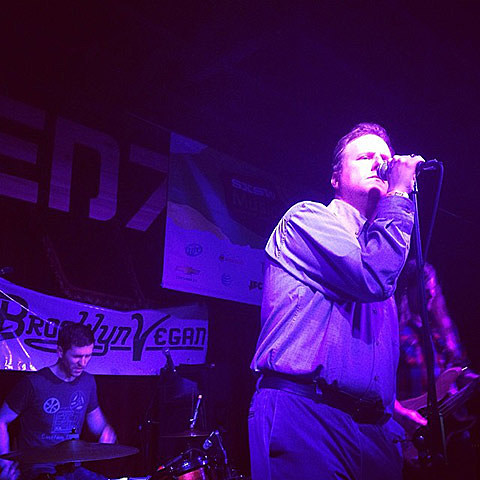 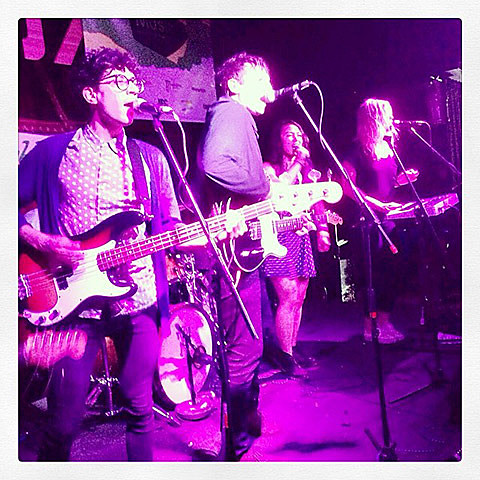 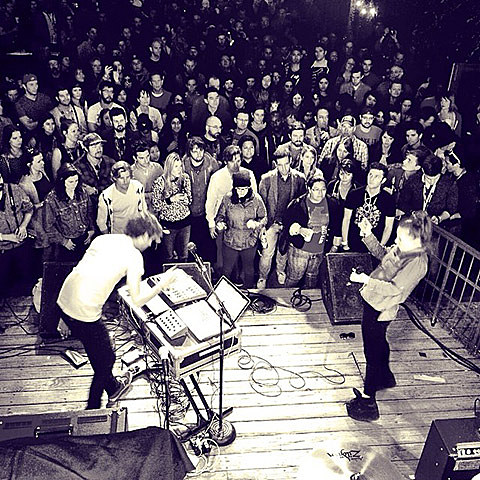 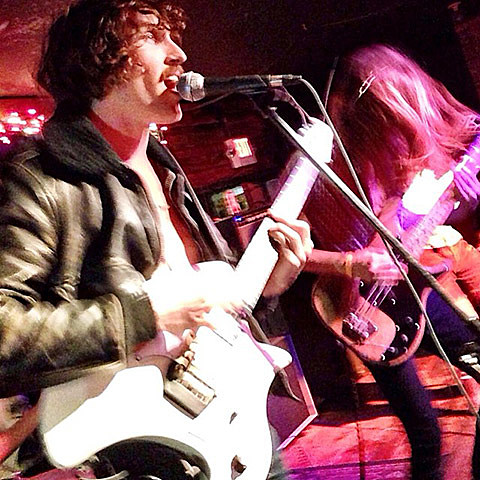 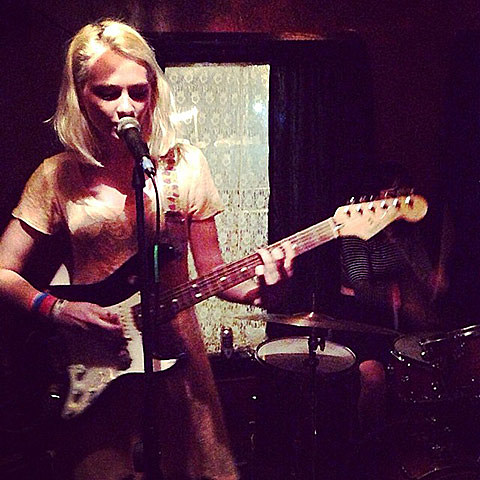