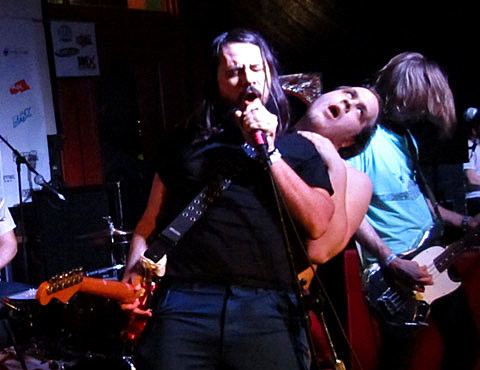 "It is what it is." I must've heard that phrase 30 times during SXSW -- be it in reference to alloted set times, equipment, sound or the free food at whatever day party I was at. You have to, as Diamond Dave once said, roll with the punches to get to what's real. Or at least have a good time.

So this year for this year's fest in Austin, I attempted to be as stress free as possible. I mostly avoided anything that would be a pain to get into, be it the hyper-hyped (James Blake, Odd Future), already popular (Strokes, Kanye), or overly hip (Fader Fort, PureVolume House). Which is probably why this was probably the most fun SXSW I've attended yet, with almost no dud bands seen.

I flew into San Antonio this year, where friends picked me up and we then drove down to Austin with a pit stop on the way for lunch, which got us to the Convention Center around 2pm to pick up our badges. First stop: The Palm Door to catch Austin locals Ringo Deathstarr whose album Colour Trip is one of my favorites of 2011 so far. I call a lot of things shoegaze, but these three have the classic '90s sound -- including Kevin Shields' glide guitar style -- down pat. Some seriously catchy songwriting keeps it out of pastiche territory. They are good and loud on the Palm Door patio, my first of many Lone Star tallboys of the week in hand, and it's a great start to the fest.

From there I headed over to Emo's for the first of BrooklynVegan's many day parties. Got there just in time to see the tail end of Mr Heavenly's set. I stuck around for Surfer Blood who I expected to play a bunch of new material but instead gave us an enjoyable hits-packed set from their first album.

Guides and sched.org were scrutinized over dinner, as the evening was planned out. First stop was to Beauty Bar for the Moshi Moshi party, specifically to see electronic duo Beat Connection who sound like they're from Sweden but are actually from Seattle. Not a lot of stage presence (two dudes behind keyboards, one of whom looks like John Daly from Freaks & Geeks) but they sound great and it's already a dance party in Beauty Bar at 8PM.

We next stopped by the Oklahoma showcase happening at Friends. Stillwater's Colourmusic lay down some awesome Can-style prog, made extra heavy with two bassists. Flaming Lips, early-'90s psych influence casts a shadow on them too. Some crazed (drunk) superfan from their hometown jumps on stage, takes off his shirt and joins the band on the mic, making for the best picture I took all week. Easily one of my favorite performances of SXSW 2011. Their album, My ____ is Pink, is out next month on Memphis Industries and is very good.

While there, a woman comes up to me and asks if I was at SXSW the previous year. I answered yes, to which she then says "Remember me? I was dressed as a hippie rooster and danced all around you." Nope, sorry lady, don't remember that. And I think I would.

Leaving my friends, I hit Maggie Mae's to catch Glaswegian electronic outfit Errors, part of the Creative Scotland showcase. I was a big fan of their first album and had been wanting to see them ever since. Kinda like the Scottish version of Ratatat, their instrumental electro-rock translates well to the stage. Worth the wait. You can see Errors all over the U.S next month on tour with Mogwai (whose label, Rock Action, they're signed to.) Tour dates, two nights at Webster Hall included, are at the bottom of this post.

Looking back over things, Wednesday was maybe the best day for me overall. Next was London's Mazes who make superior '90s style indie rock. (Not to be confused with 1900s offshoot Mazes who have since changed their name I think.) The obvious comparison is Yuck, but it's less GBV/Sebadoh and more Pavement/Number One Cup. Also like Yuck, they're not the most energetic band I've ever seen but they sound great.

I close out the night at Red Eyed Fly. Sky Larkin have been telling me to go see fellow Leeds band Pulled Apart by Horses for nearly three years, warning me I might not want to get too close. I now understand why... they are an explosion on stage, bouncing off the walls, bounding into the crowd, climbing trellises, singing on the bar and other wild behavior. No puking, thankfully, which I hear has happened on occasion. Kinetic and spastic as they are, Pulled Apart by Horses' music -- thrashy, mathy, riffy, shouty -- is not really my cup of tea.

Pete & the Pirates were supposed to be on at 1AM but things were running very late. I'd been up since 3:30AM -- my flight had left at 5:45am -- so when it hit 1:30, I opted for a much-needed full night of sleep. Slightly disappointed but I'd see P&P later in the week anyhow...it is what it is.

A few more pictures, video of Colourmusic's performance, and those Errors tourdates (with Mogwai) are below. 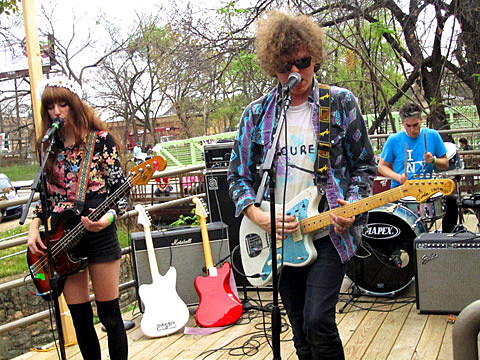 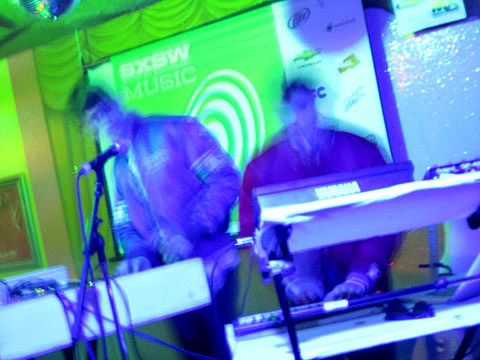 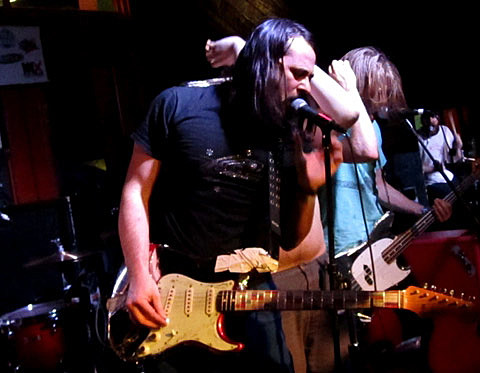 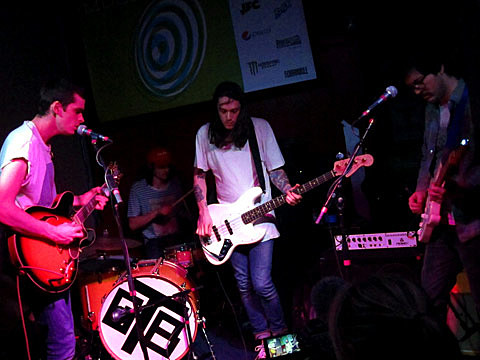 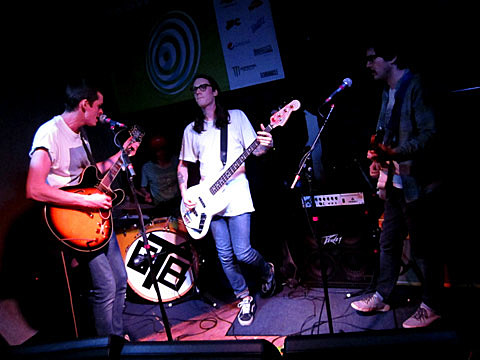 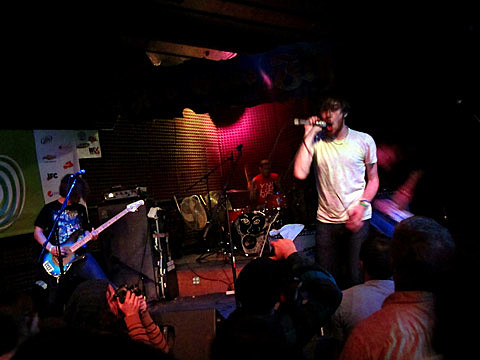 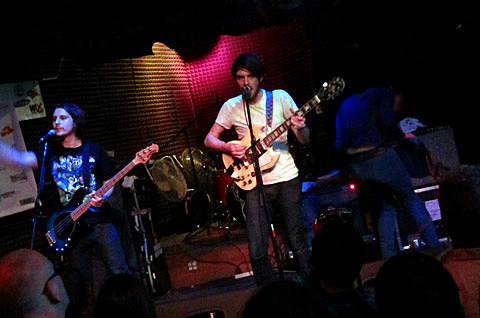 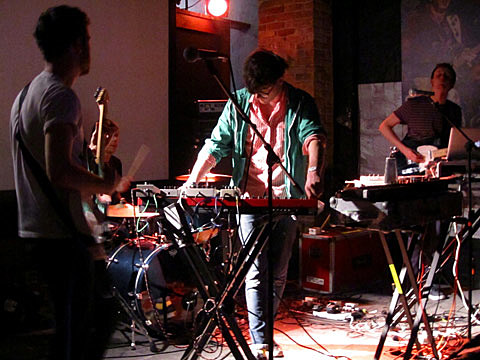 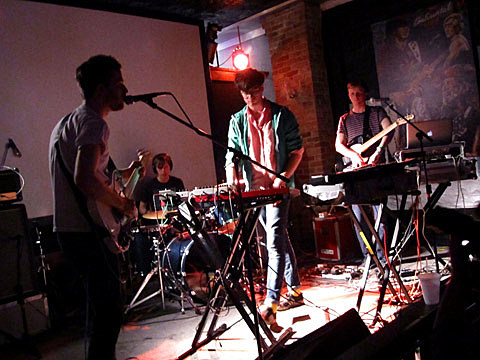