"numb fingertips from the guitar playing last night. .. worth it coz I get to tell people I played Lincoln Center with Billy Bragg!!" - Marsha Burnett 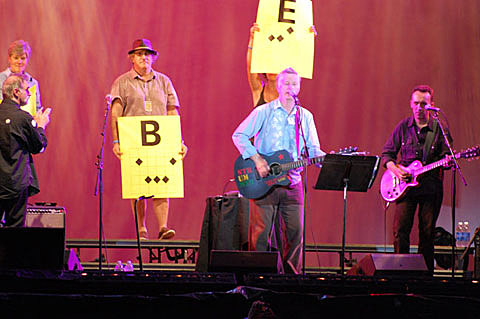 Billy Bragg kicked off the FREE Lincoln Center Out Of Doors 2011 season on Wednesday (7/27) with his "Big Busk". He invited people to play and sing along to the songs, many of which were covers. I pictured it more like a parade, but he basically just played from the stage. Some in the audience had guitars. Ian Jane writes:

Bragg launched into a cover of Johnny Cash's I Walk The Line... not the greatest starting point and probably the worst song of his set. From there he covered The Monkees, Smokey Robinson, Simon & Garfunkel, Bob Marley, The Weight, and most puzzlingly, Cee-Lo Green (turning 'Fuck You' into 'Forget You' as there were kids in the audience). As far as material from his own catalogue, the only tracks we got were Power In A Union (itself a cover of sorts but one of Bragg's most powerful songs) and New England (the only track that really seemed to have everyone in the crowd singing along). He came out for a quick encore and did a rock solid cover of Kristofferson's Me And Bobby McGee before finishing the night.

Check out a video of Billy Bragg covering The Band's "The Weight" below.

Billy Bragg plays his last of three City Winery shows tonight (7/29). That show is sold out. Video and Out of Doors schedule below...

LINCOLN CENTER OUT OF DOORS FESTIVAL 2011