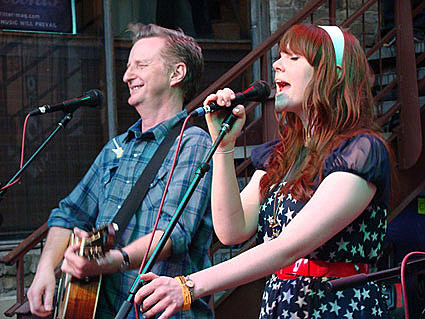 "Our friendship is based around an affinity for the Shangri-las," said Bragg as he strapped on Nash's guitar, suggesting that this was more than just a deft move by her people to insulate her from knee-jerk criticism ("Well if Billy Bragg thinks she's a bit of alright then maybe..."), while also placing her within a grand British tradition of songwriters like Ray Davies, Paul Weller and Bragg himself. The two traded lines like old friends, before launching into a three-song set of the Shangri-las' "Give Him A Great Big Kiss," Bragg's classic "New England" and Nash's "Foundations," a tell-off song that's everything "Dickhead" isn't: clever, introspective and fun. [Time Out]

That's not the first time Billy & Kate performed together - videos from SXSW and another time can be found at the end of this post.

Billy Bragg played a few shows while he was in Texas for SXSW, and then last night (March 16th) he opened for The Pogues at Roseland Ballroom in NYC.

Billy also has a new album coming out April 22nd on ANTI called "Mr. Love and Justice". The MP3 on the top of this post is from that album. Download that now. Then check out the videos of he and Kate below.......