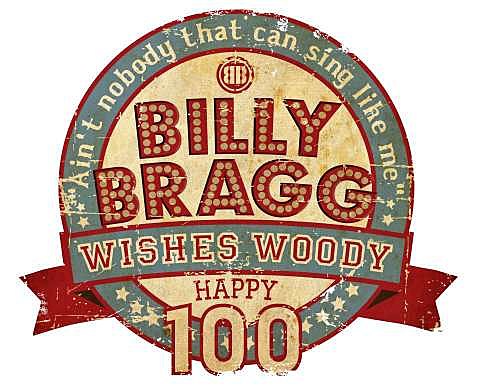 As mentioned earlier today, Billy Bragg -- whose Mermaid Avenue records with Wilco brought the songwriter back in to the pop culture zeitgeist in 1998 -- will be in NYC soon for some Woody Guthrie 100 celebrations. It's part of a North American tour for Bragg who tonight (7/6) will play the legendary Winnipeg Folk Festival. The tour will then continues, and includes a stop at the Woody Guthrie Folk Festival in Guthrie's Okemah, OK birthplace on July 12th.

Bragg then heads to NYC for City Winery's WoodyFest on July 13 (tickets) with Amy Helm & Joe Purdy and host Steve Earle who then plays with Billy again in Coney Island the next day on Woody's actual birthday (July 14). The Coney Island potion includes two events: a screening of Mermaid Avenue documentary Man in the Sand followed by a book/CD signing with Bragg and Nora Guthrie; and an outdoor screening of Hal Ashby's 1975 Woody Guthrie biopic Bound for Glory that will be preceded by a performance by Bragg and Steve Earle at 8PM (the movie starts at 8:45PM).

Bragg's tour continues after that, hitting Sweden's Way Out West festival in August, and many other Woody-themed shows throughout the year. All dates are listed below.

Back in April, Nonesuch Records released Mermaid Avenue: The Complete Sessions which takes the original, critically acclaimed 1999 album where Wilco and Bragg wrote music to unpublished (but complete) Guthrie lyrics and adds 17 previously unreleased recordings made during the Mermaid Avenue sessions, plus a DVD and 48 page booklet.

The Billy Bragg show at City Winery is one of three nights of "Woodyfest" that Steve Earle is hosting and playing. Steve doesn't have any more NYC dates scheduled after that at the moment, but later this month he does head out on a tour with the Dukes that hits Tarrytown and in September he's doing a solo, acoustic tour that visits NJ, Bethel, and Poughkeepsie. In October he plays Austin City Limits.

Below you can read a little more on Guthrie and the Mermaide Avenue album, penned by Billy himself, plus all upcoming BB tour dates. 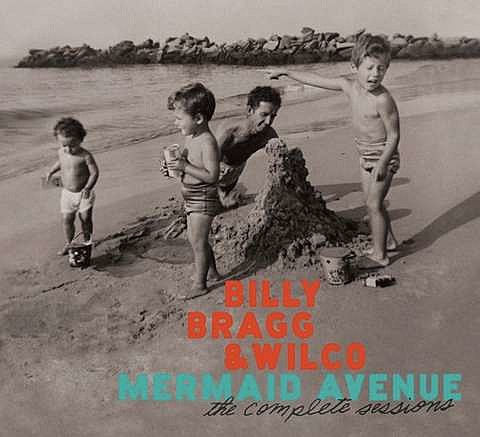 Born on 14th July 1912 in Okemah, Oklahoma, Woody Guthrie was one of the most influential figures in popular music, inspiring Bob Dylan and a generation of topical singer-songwriters in the 1960s and even having an influence on punk--Joe Strummer modelled himself on Guthrie, asking friends to call him Woody as a teenager.

Guthrie was the original alternative musician. His most famous song 'This Land is Your Land' was written in 1940 as a response to the number one hit of the day, Irving Berlin's patriotic hymn 'God Bless America'. His alt. credentials were underlined by his determination to write about the lives of ordinary working people and to oppose racial discrimination. On his guitar he painted the words 'This machine kills fascists'.

Woody's career as a musician can be divided into two phases. The first western phase saw him living in Oklahoma, Texas, and California during the Great Depression. It was during this period that he composed his most famous songs, mostly dealing with the problems faced by farm labourers forced off of the land by dust storms and bailiffs, migrating to California to seek seasonal work as fruit pickers.

The second phase of his career began in 1940, when he moved to New York City. Here he recorded his dust bowl ballads and hooked up with musicians such as Pete Seeger and Leadbelly. New York inspired him to new heights of song-writing, but most of the material he composed in the '40s was never recorded, as topical songwriters became suspect in an America that was undergoing a communist witch-hunt.

By the end of that decade, Woody was beginning to experience the early symptoms of Huntington Disease, a degenerative condition of the nervous system for which there is no cure. By the mid-50s, he was no longer able to perform and spent the rest of his life in hospitals. When he died in 1967, he left thousands of unrecorded songs in manuscript form. What he didn't leave behind were the tunes. Like myself, Woody couldn't write musical notation. When he wrote a song, he kept the tune in his head. As a result, when he died, the tunes for the songs which he hadn't had time to record were lost forever. And there were thousands of them. It's estimated Woody only managed to record 10% of the songs he wrote in his lifetime.

It was this treasure trove of songs that Nora Guthrie discovered when she founded the Woody Guthrie Archives in the early 1990s. She'd always known that they were there, in boxes at her mother's house while she was growing up, but she never realised how many there were and how varied their subject matter.

Nora was concerned that, over the years her father had become a two dimensional figure, known only for 'This Land Is Your Land' and his influence on Bob Dylan. The unrecorded songs, she felt, offered us a three dimensional vision of her father as more than just a dust bowl balladeer. So became determined to bring these songs to a greater audience.

I first met Nora in July 1992, at a concert in Central Park, New York, to commemorate Woody's 80th birthday. She began sending me lyrics of her father's unrecorded songs, encouraging me to write new music and make a collaborative album. Her initiative finally bore fruit in 1997, when I got together with Wilco in Chicago and Dublin, where we recorded nearly 50 'new' Woody Guthrie songs.

To commemorate the 100th anniversary of Woody's birth, Nonesuch Records has released Mermaid Avenue: The Complete Sessions, a four disc set, comprising Volumes I and II as well as a new collection of 17 songs from the original sessions, Mermaid Avenue Volume III. The fourth disc contains Man in the Sand, Kim Hopkins' 1999 film, which documents the collaboration between Woody, Wilco and me.

These shows in September will also form part of this year of celebration. I'll be playing acoustic instruments and singing from the book of lyrics which I compiled from the archives and used during the sessions, quoting from Woody's handwritten notes that are often tagged onto the manuscripts. I have recruited some friends to join me at the shows to add their voices and interpretations to the ever evolving and continually relevant words and work of Woodrow Wilson Guthrie.