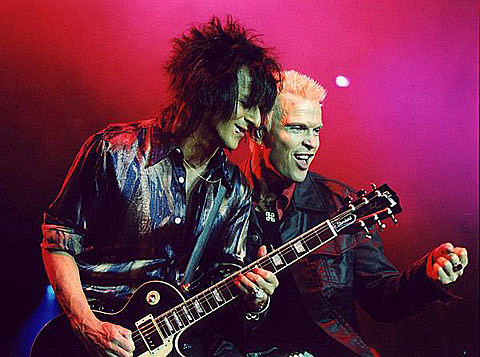 Billy Idol will be taking on a fairly massive world tour this summer and into the fall. He goes across Russia and Europe in June and July before playing North America shows in August and September. Billy will be at NYC's Hammerstein Ballroom on Wednesday, September 15th. Tickets are on sale.

Two days later (9/17) he plays House of Blues in Atlantic City (tickets TBA). For all the upcoming dates, he'll have some new band members in tow.

In addition to his longtime guitarist Steve Stevens, Stephen McGrath on bass and Derek Sherinian on keyboards, Billy Idol will be joined this year by acclaimed guitarist Billy Morrison and drummer Jeremy Colson. Morrison, one of the founders of Camp Freddy and front man for Circus Diablo, has previously played in The Cult, Stimulator, Doheny and Into a Circle, while Colson (Morrison's collaborator in Circus Diablo) is known for his work with Steve Vai, with whom he's worked since 2002.

How will the show be? If the live video of "White Wedding" posted below is any indication, Billy's voice has taken some hits over the years (and the 'lounge' version of "Rebel Yell" will hopefully stay retired). The full band rendition of "Rebel Yell" fares quite a bit better though. Those videos and all tour dates are below...