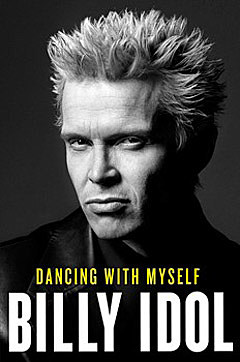 Billy Idol will have a busy month with a new book and album, as well as an appearance at the CBGB Festival in NYC. His new album, Kings & Queens Of The Underground, is his first studio album in nearly a decade and was produced by Trevor Horn and Greg Kurstin with guitar contributions by longtime collaborator Steve Stevens. Two songs, "Can't Break Me Down" and "Postcards from the Past," can be streamed below. The album's out October 21.

Meanwhile, Billy Idol's autobiography, Dancing With Myself, is out this week (10/7). Later this week, he'll play acoustically and participate in a Q&A as part of the CBGB Fest's keynote address happening Thursday (10/9) at CBGB Fest HQ, Center548 (548 W 22nd St) with Ex-Cops and Skins (tickets).

Then in January, Billy Idol will launch a proper tour with support from Broncho (who put out a solid album this year) that will hit NYC on January 28 at Beacon Theatre. Tickets for that show will go on sale Friday (10/10) at 11 AM.