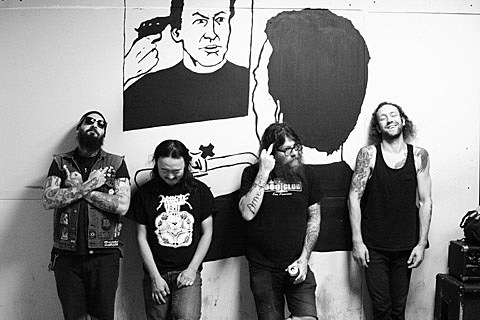 The term "stoner rock" has so many negative connotations. Sure, Bison BC may converge musically with some of the ideas that are symptomatic of the genre, but the Canadian band also adds in elements of thrash, groove, and punk rock with their booming sludgy sound. Not to mention the fact that anyone who has seen Bison's tour schedule in previous years knows that they aren't the type to sink deep into a couch with bong in hand.

Further proof in my theorum that Bison BC are the antithesis of a stoner band, these canucks are on an album-every-two-years-cycle and they keep up with that trend on their new baby, Lovelessness. The band's third LP features "Last and First Things" and "Anxiety Puke / Lovelessness," both of which are streaming below (the latter makes its debut in this post). Get your copy on October 22 via Metal Blade.

Check out the new songs below. So far no shows to speak of, but I would imagine that will change very soon.