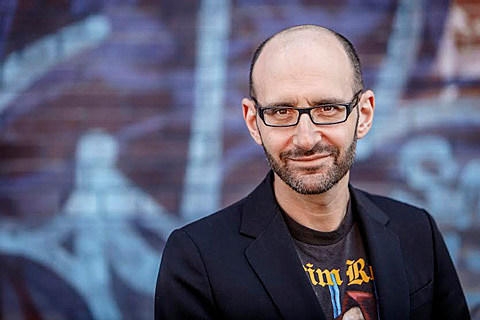 Unlike most rock memoirs, Jon Fine's YOUR BAND SUCKS: What I Saw At Indie Rock's Failed Revolution (But Can No Longer Hear) is not a tale of triumph. It's something much more relatable. His band, Bitch Magnet, never made it big. They never defied the odds and overcame. None of that mattered. They did it anyway. YOUR BAND SUCKS is a true window into why we make art at any cost even when it seems like the world doesn't care. Jon has been making weird, loud fucked up rock music for over thirty years in bands, along with Bitch Magnet, like Vineland, Coptic Light and Don Caballero. You can hear Jon talk about it in person with Ted Leo at McNally Jackson in NYC Tuesday May 19 at 6:30 PM. After that he'll be touring the country talking with people like Mark Arm of Mudhoney and Clint Conley of Mission of Burma. All of his live dates are listed at the end of this interview.

I recently sat down with Jon over a Meat Hook sandwich in his old neighborhood Williamsburg to talk about his truly excellent book.

BrooklynVegan: I was surprised when I read the book. I thought it was going to essentially be an anecdotal history of independent rock music...

Jon Fine: ...like Our Band Could Be Your Life.

BV: Exactly, or Please Kill Me, but this is not that. It's an intensely personal memoir about your obsession with rock music. Did you know right away that's how you wanted to structure it?

JF: I knew it was going to be a memoir, but the other books that have been written as memoirs about this time period were written by people who were famous. I knew I was not and kind of had to make a virtue out of that. I was interested in the bands that I knew, and I really liked, who weren't the big bands. I mean no one knows these fucking bands. People kind of know Slint very vaguely, but Bastro, Slovenly...you probably hate these bands.

BV: I hate some of them, but it doesn't matter. It doesn't matter if you like the bands or even if you know the bands because it's not about the bands necessarily. It's about you and your relationship/addiction to music.

JF: That was kind of what I was hoping for. To me this was a very interesting moment in American culture. This isn't the kind of book that gets into it like "and on this alternate version of 'Rocks Off' is the 8th take that they did in Montreux and you can hear Keith nodding off..." (laughs). You don't need that level of interest.

It's a really personal book. I couldn't think of any other way to write it. I didn't want to write a history because that's kind of been done, but at the same time I wanted to bring other people into it. I just really wanted to know what it was like for these other bands that were in this middle to lower tier with us. Most of them eventually have to stop doing it. The other rock memoirs from this genre, like Dean Wareham, Bob Mould, Juliana Hatfield they all kind of end with them still "doing it" in a fashion. With a lot of these bands in the book, we all had to stop because it wasn't an option to support yourself. I'm not talking about getting rich; I'm talking about paying rent and feeding yourself. Whether it's Anne Eickelburg of Thinking Fellers, or Mark Robinson of Unrest, or Justin Chearno and Scott DeSimon of Pitchblende, you hit this wall in your thirties. I just find that really interesting and not just because it happened to me. I hope other people do too. 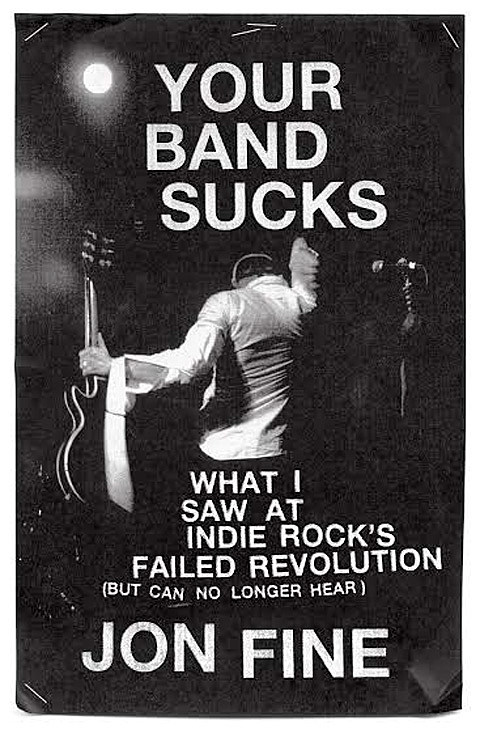 BV: I think for the majority of people involved in some sort of counterculture they're not in the band that becomes a huge success and most people don't make a career out of it, but often times being into hardcore, punk, indie or whatever, it informs what they do next. Do you feel like you've been instilled with any particular spirit having being involved in that world in the work you do now?

JF: The whole thing about punk rock was that, "You despise me, but I'm gonna keep doing this. I'm gonna be here." There are some analogues with that to journalism. People really hate journalists. You're asking people questions they don't want to answer because what is news? News is what someone doesn't want you to know. So I guess to a degree, yes.

I think I've always identified as an outsider and I still kind of feel it. It's a large part of how I view the world. I like my life and I have all the accoutrements of a nice grown-up life but I still have this...coil. There's people I meet through work and they are like, "Oh, Bitch Magnet. Ha ha ha" and I just want to say, "Fuck you." You know what I mean? (laughter) Seriously, there was this really cool thing and I'm sorry you know fuck-all about it because you weren't trying to know about it. It was a beautiful thing and the people who were there know it was a beautiful thing and I'm kind of sorry you don't and by the way fuck you. (laughter)

BV: I made a note of this. Other than your band what band do you think gets mentioned the most in the book?

JF: YES! Are you serious? That makes me so happy. I thought it was going to be Sonic Youth or something. (laughter)

BV: Voivod exists outside of the world you are writing about yet you use them throughout the book as an example of what you like about music. Weird people making weird stuff.

JF: Voivod are amazing. They're from Quebec. They're not from Montreal but this weird aluminum-mining town outside of Quebec City where everyone over the age of fifty has some horrible disease because they've been inhaling aluminum fumes their whole life. They are French Canadians so they can't really speak English. They are obviously the craziest, weirdest dudes in town. There's no way that any of them ever had sex or ever had a girl talk to them in High School. They start this insane band based around this weird...I don't even know the mythology. It's about a robot? (laughs) Seriously. Every one of their albums had this crazy conceptual thing. Their first albums in particular were recorded really shitty. They're trying to sing in English and lyrics are all fucked up. Basically because they were too weird and too shitty as musicians to be in a proper metal band they came up with something so much cooler. It's like "I'm gonna make this really crazy chords because I don't want to play bar chords." Or "We're gonna do this part then stick this other part that actually belongs to a totally different song and the name of the song is 'Kor-Gurr The Exterminator.' Oh and by the way our drummer is really into making these crude graphics and they are going to be all over everything."

This is totally it! They did everything themselves. They had to. They're in the middle of nowhere. They were kind of awful at first, but because they were awful they were amazing.

Like that band Vomit Launch. Do you remember them?

They actually weren't any good except they were kind of great. None of them could play their instrument. None of them looked like they had any business being in a band together. They lived in Chico, California. They were the weirdoes that formed a band that ended up lasting six years and putting out some weird, almost accidentally great music.

I love that idea. To me that was the whole thing. You and the three or four other people from your town that no one would talk to, that got beat up, no girl would talk to you and one of you starts getting into music. You don't want to be in a band that sounds like the Ramones so you start this thing and you can't accomplish what you're trying to do and it ends up sounding kind of cool anyway. That to me is what all this was about. That's not even bands like Black Flag and Mission of Burma, who I love, because they knew what they were doing and we were just kind of figuring it out.

BV: There is feeling that "I know this won't be successful." Failure is built into the equation, but now that's changed. Do you think that affects the way people thought about forming bands?

JF: I want to be clear; I grew up well off in the suburbs. I had options. I had stuff to fall back on, but I had to do this. I couldn't explain exactly what it was, but I had to do it. I didn't know where it was going to go. In 1986 the highest aspiration, which seemed perfectly great to me, was to be like Sonic Youth. That meant you toured seven months out of the year, you sold out the small club in every town. You maybe needed to do a month's worth of work when you weren't on the road. That sounded pretty great to me. That sounded really great to me. Black Flag was on the road getting ten bucks a day and doing two hundred plus shows a year and I thought, "I'll do that. That's what I want to do."

Jayson Green is a comedian and musician who has been in bands like Orchid, Panthers, Ritual Mess, Cheeseburger and currently Violent Bullshit. He hosts a radio show on East Village Radio called CHEAP SHOTS WITH JAY AND J every Monday from 2-4pm est. 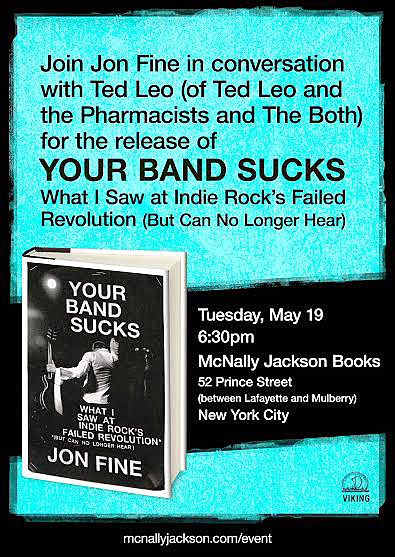 JUNE 7 - PORTLAND, OR at Powell's
(in conversation with author/music writer Douglas Wolk)

JUNE 23 - WASHINGTON D.C. at Busboys and Poets
(in conversation with Andrew Beaujon, senior editor of THE WASHINGTONIAN and former front man of Eggs)
--