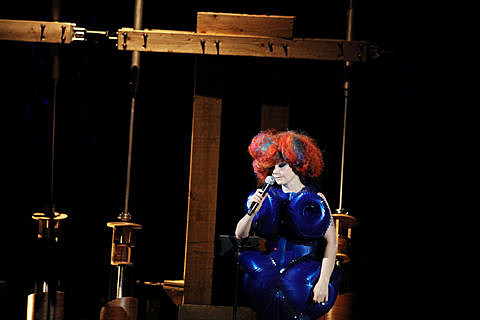 Bjork has extended her NYC residency by one more show, in part to make up for the show she had to cancel, though the new show is at Roseland and the cancelled one was at the New York Hall of Science.

In appreciation of her fans' support Björk is adding one final show at Roseland Ballroom on March 5. Individuals who purchased tickets for the February 9 show will be offered these tickets first in a pre-sale to begin tomorrow, Tuesday, February 14th at 10 A.M. Tickets will be available to the public at 10 A.M. Wednesday February 15.

The next Bjork show is 2/15 New York Hall of Science. All shows are listed with more information below...

Björk is currently in the middle of six performances at the New York Hall of Science, New York City's only hands-on science and technology museum (located just across the Grand Central Parkway from Arthur Ashe Stadium and Citi Field in Flushing Meadows, Corona Park). Doors open at 6:30P.M. for the Biophilia integrated exhibits and the theatre at the New York Hall of Science will show Biophilia audio-visual playback at special times throughout the residency. There will also be four performances at Roseland Ballroom (239 West 52nd Street). The New York Hall of Science shows have been set to Björk's original Biophilia specifications, as audio-visual shows in an intimate setting with no audience member more than a few yards from the stage. All shows are performed in the round.