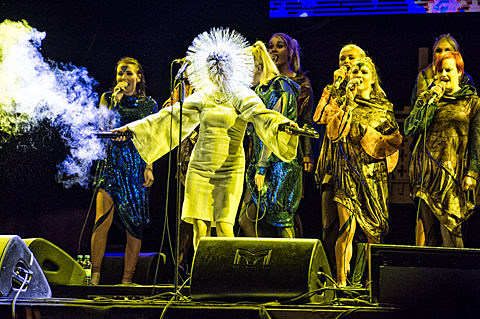 Directed by Nick Fenton and Peter Strickland, the Biophilia Live film augments the live show with additional animated sequences, taking viewers into Björk's immersive performances, which included a number of custom-built experimental instruments, such as a Tesla Coil, a pendulum harp, and a hybrid gamelan-celesta. The show also featured an Icelandic female choir and a series of nature films. [The Creators Project]

Bjork: Biophilia Live, the Bjork documentary on the multimedia live shows she played in support of her 2011 album Biophilia, already premiered at Tribeca Film Fest, and now it's being screened at several more locations worldwide, including two more in NYC. First, it screens at IFC Center from September 26 to October 2, along with a screening of the 2013 documentary When Bjork Met Attenborough. Then, once again at Brooklyn's Nitehawk Cinema from October 10 to October 16. Showtimes TBA, and tickets are not on sale yet but you can check here for updates. There will be one more chance to see it just outside of NYC at Long Island's Camera Arts Centre in Huntington on October 29 (tickets).

The Creators Project just made a new trailer for the film, which you can watch below. Also below is the full list of theaters it will screen in and what night it opens in each one. More info, including how long each theater will be showing it for, here.

And as mentioned, Bjork's getting a retrospective at MoMA in 2015.

* With screenings of When Björk Met Attenborough