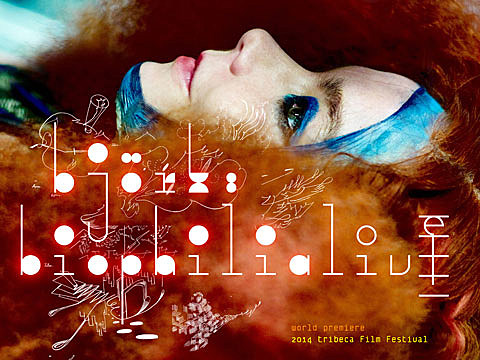 Last year The National premiered a film at Tribeca Film Fest (a film which opens in some theaters this week). This year Tribeca will welcome Bjork! The press release reads:

From a mind unlike any other, Biophilia Live chronicles the multidimensional concert centered on the eighth studio album of avant-garde Icelandic artist, Björk. Directors Nick Fenton and Peter Strickland, unique voices in their own right, film Björk live in performance, and punctuate her music with evocative animation from apps created by the world's top 10 designers combined with science and nature archive and found footage. This is inspired by the themes of the album which explore the relationships between musical structures and natural phenomena--atomic, cellular and cosmic. The infinitely creative journey presents a culmination of work that represents one of the most original musical endeavors of a generation.

The film will screen at TFF on April 26th.

The Tribeca Film Festival runs April 16-27 in NYC, and will kick off at Beacon Theatre with a documentary about and a performance by Nas.