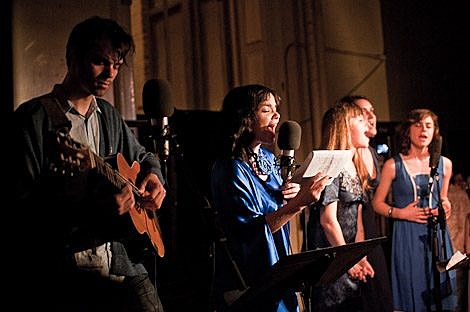 Dirty Projectors and Bjork will be releasing a recorded version of Mount Wittenberg Orca, the suite they debuted at their Housing Works benefit in April 2009. The seven songs run 20 minutes total and are being released online on June 30th.
Stereogum points out...

"The Projectors and Björk recorded the new cycle April 28-May 1 at Rare Book Room with Nicolas Vernhes. (It was mixed by Vernhes with Longstreth and Björk.) It's the first new music since Bitte Orca. In contrast to that complex studio working -- something I mentioned in the press release for the album, full disclosure -- Mount Wittenberg Orca was recorded with the group together in a single room, only overdubbing lead vocals and solos. The songs are instantly recognizable from the Housing Works show (especially the opener), but they've noticeably deepened. The multi-part harmonies feel like the group's most adventurous to date. Nat Baldwin's bass is Sunn heavy. And, as you might expect, Björk's singular voice meshes gorgeously, floating atop when necessary. Something essential that remains was the original's idea of trying to use the book store's natural acoustics and as little amplification as possible. The sound is honest, immediate."

You can preorder the songs for a $7 donation. Dave Longstreth writes that, "We've decided to give away all the money that Wittenberg generates to the project of creating international marine protected areas. Only 1% of the oceans are protected in any way and this is a huge problem. We're working with the National Geographic Society to create areas of sustainability, so the oceans don't end up like a giant poisonous corpse hugging the continents." Awesome!

There is a series of teaser videos for the songs by "Stillness" director Matthew Lessner, which are posted below. Each has a different snippet of sound from the record: an eerie vocal cadence at the end of the first video, a dissonant chord burst on the second (and some prairie calisthenics), terse rhythms of the third, and a Xenakis-style glissando of the fourth. The final one has a melodic descending part that's sort of a companion to #1.

Dirty Projectors are on tour currently and play NYC's Terminal 5 on September 11th.

Olof Arnalds opened that Housing Works show, and she'll be in NYC for a show at Rockwood Music Hall on July 19th (tickets). She'll follow that up with three dates opening for Jonathan Richman in San Francisco, where she'll be debuting songs from her forthcoming record, Innundir skinni, (which Bjork guests on) due September 1st on One Little Indian. Maybe she'll give NYC a pre-debut peek at the songs. Pitchfork has a stream of the one Bjork sings on. Olof's dates and more are below...