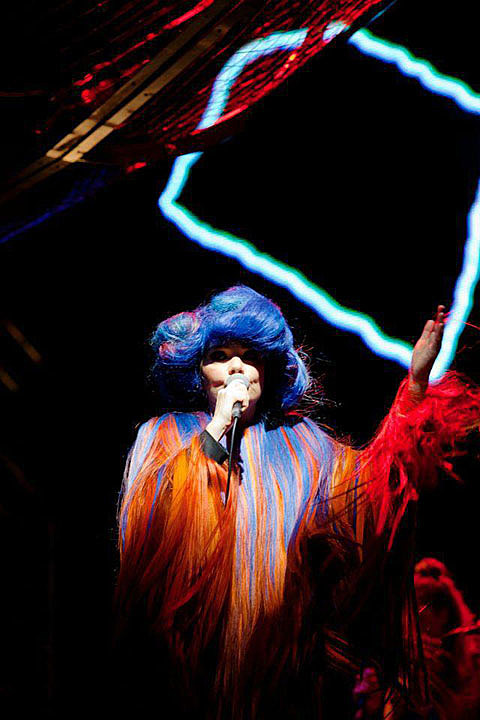 Bjork posted the following message to her website last week:

A few years ago doctors found a vocal polyp on me chords ... i decided to go the natural way and for 4 years did stretches and tackled it with different foods and what not . then they discovered better technology and i got tempted into hi tech lazer stuff and i have to say , in my case anyway : surgery rocks ! i stayed quiet for 3 weeks and then started singing and definitely feel like my chords are as good as pre nodule ! it´s been very satisfying to sing all them clear notes again . im sorry i had to cancel stuff earlier in the year , didnt want to talk about this until i knew for sure if it would work . so looking forward to singing for you in 2013 all the warmth ,björk.

That sounds like good news! The Independent has even more:

"[Bjork]is now considering adopting the fan-funding model to raise money to reprogram Biophilia for Android. "It was always our target that it wouldn't be a coffee-table thing for rich kids. We are going to go to Paris in February and the West Coast of the States in the spring. And then we could go to South Central. And teach them about scales and chords. I'm kidding... No, I'm not, actually!""

The article also points out that her new favorite band is Death Grips who are responsible for two remixes on her new Biophilia remix album.

The France Biophilia shows were officially announced today. Check out the exact dates and venues below. The "West Coast of the States" dates mentioned above, have still not been announced, but perhaps there is some Coachella in her future? If so, and Sigur Ros in fact are playing too, it will be a good year for fans of Icelandic music. Oh, and she told NY Mag earlier this year, when she was in NYC for her residency here, that she was planning on San Francisco (which would fit nicely between Coachella's two weekends).

More info on Paris below...

Biophilia premiered last summer at the Manchester International Festival (MIF) followed by a sold out residency in Björk's hometown of Reykjavik, Iceland. Further residencies in New York (at the New York Hall of Science) and Buenos Aires have followed along with festival performances in Europe and South America. Initially commissioned by MIF, the intimate performance finds Björk accompanied by a set of unique musical instruments created by a team including an Icelandic organ builder and a graduate of the MIT Media Lab. Among these creations are four 10-foot pendulum-harps, a MIDI-controlled pipe organ celeste re-fitted with bronze gamelan bars, and twin musical Tesla coils. The performance also features an award-winning 24-piece Icelandic female choir and visuals from the Biophilia Apps and musicians including Manu Delagu and musical director Matt Robertson.

In addition to the live performance, Björk will also present her Biophilia Educational Program. Featuring interactive science and music workshops for middle-school children, the series leads students on an intensive study of the scientific concepts at the core of Biophilia's songs, including crystalline structures, lunar phases, viruses, and more. Students will also learn to use the Biophilia Apps as tools for music composition and delve into the study of how musicology relates to nature. The city of Reykjavík just announced that the Biophilia educational project will be included in Reykjavik's school curriculum for the next three years. The series debuted at the Manchester International Festival and has also travelled to Reykjavik, New York, Buenos Aires and the Oya Festival in Oslo.

Björk has collaborated with app developers, scientists, writers, inventors, musicians, and instrument makers to create a unique multimedia exploration of the universe and its physical forces--particularly those where music, nature, and technology meet. The project is inspired by and explores these relationships between musical structures and natural phenomena, from the atomic to the cosmic. "Biophilia's songs are astounding," NPR said. "These songs have room to breathe, employing space and silence as much as melody and harmony. The sparse instrumentation and arrangements become gorgeously intricate meditations on which to build...vocal melodies unfurl more like transcendent devotionals than typical verses, and become even more stirring when accompanied by a chorus of voices that could fill a cathedral."

Each performance will feature songs from Biophilia, Björk's most interdisciplinary project to date. Stereogum said that "Biophilia is one of 2011's best releases...[T]he songwriting is sharp, the feel immediate and enveloping." The 10-track album, out now on One Little Indian, is available digitally, in CD format and on vinyl. Additionally, each of the 10 songs is available as a special feature of the Biophilia App for iPad, iPhone, and iPod touch. Biophilia was named one of 2011's Best Apps by Apple and landed on year-end best-of lists from NME, Mojo, The Observer, and Uncut, among others. The latest version is available through In-App Purchase, exclusively at iTunes and the App Store .

Tickets will be available from December 10th at www.avosbillets.com. These are the dates: