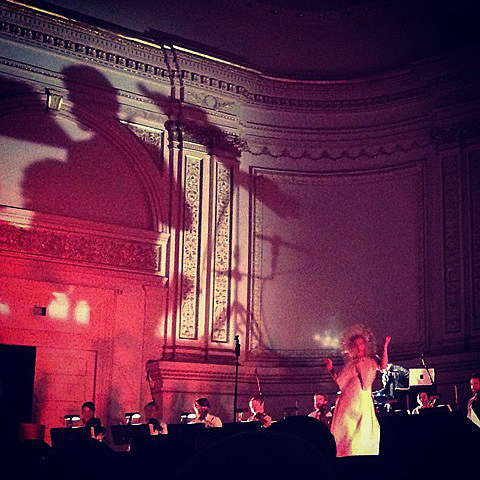 The matinee performance was preceded by a week of poor press reviews for the Björk career retrospective at New York's Museum of Modern Art, which opens on Sunday (Mar. 8). But any critics disappointed by the MoMA exhibit were certainly not voicing that dissatisfaction during Saturday's performance, in which Björk was greeted by rapturous applause at nearly every interval and an extended standing ovation when her set concluded. Backed by percussionist Manu Delago, electronics whiz Arca (who worked closely with Björk on Vulnicura) and a 15-chair string orchestra called Alarm Will Sound, Björk re-opened her personal wounds on a cold afternoon, and traded in the expansiveness of her Biophilia stage setup for something much more raw but no less distinctive. [Billboard]

The first of Bjork's seven sold-out NYC shows happened on Saturday (3/7) at Carnegie Hall, one day before her MoMA retrospective opened to the public. The noon matinee also featured her Vulnicura collaborator Arca, percussionist Manu Delago and 15-piece chamber ensemble Alarm Will Sound. Her set was divided into two sections, with intermission, and then a two song encore. Setlist and video from the show are below.

She'll perform another Carnegie Hall matinee this Saturday (3/14), followed by two Kings Theatre shows (both on 3/22) and three City Center shows (3/25, 3/28 and 4/1). Again, all of those are sold out, but she also plays Governors Ball, which is not sold out.

In other news, Bjork just released the video for Vulnicura track "Lionsong." It's a collaboration between Björk, Inez & Vinoodh and visual effects production house Framestore:

Framestore created a number of visual effects, including the stars and the glowing embers that surround Björk, as well as enhancing the video's other-worldliness by extending her legs to unnatural proportions. The exquisite coloring for the piece was done by Tim Masick of Company 3, turning her into the exotic, red-toothed, bronze dancer.

Watch the "Lionsong" video below...

Encore:
Harm of Will
Wanderlust