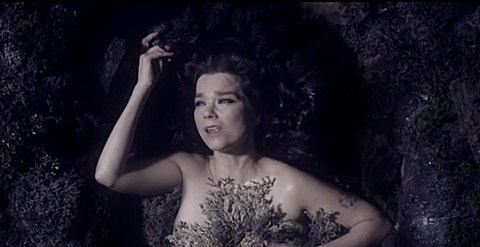 Part of MoMA's upcoming Bjork retrospective (March 8-June 7) is a sound and video installation titled "Black Lake" which was directed by Andrew Thomas Huang, with creative direction by Björk, Andrew Thomas Huang, and James Merry. There's a provocative trailer for the piece, which uses Bjork's Vulnicura song of the same name, that has her as an Earth Mother. You can watch it below.

There is also a commemorative Bjork @ MoMA exhibition catalog for sale:

Designed by top graphic design agency M/M as a slipcased world of wonders, this publication--which accompanies The Museum of Modern Art's spring 2015 exhibition--is composed of six parts: four booklets, a paperback, and a poster. The booklets contain illustrated texts by curator Klaus Biesenbach, New Yorker music critic Alex Ross, professor of musicology Nicola Dibben, and philosopher Timothy Morton (in conversation with Björk), while the poster features artwork from Björk's albums and singles. The poster itself is composed of small perforated stickers, similar to a giant sheet of stamps. The main book focuses on her major albums and the personas created for each one. Poetic texts by longtime collaborator Icelandic poet Sjón are accompanied by shots of Björk performing live; stills from music videos made by directors including Michel Gondry, Chris Cunningham, and Spike Jonze; images of Björk in costumes by designers such as Alexander McQueen and Hussein Chalayan; and shots by photographers such as Nan Goldin, Juergen Teller, Stéphane Sédnaoui, Inez van Lamsweerde & Vinoodh Matadin, and Araki.

Meanwhile, Bjork's UK label, One Little Indian, is reissuing all of her records on colored vinyl and preorders are being taking now.

Bjork's six upcoming live performances are all sold out, and she also plays Governors Ball which is still on sale. "Black Lake" trailer below...