Bjork at Housing Works in 2009 (more by Ryan Muir) 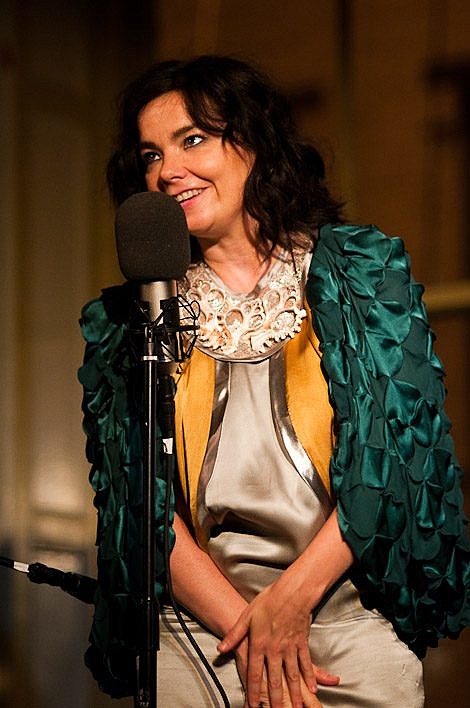 Bjork has been stirring things up lately as she preps her upcoming seventh album Biophilia. The album, which has no official release date yet, is set to be a multi-media affair that encompasses a 10-song album in many formats. There's the traditional format, and music videos for every track directed by long-time collaborator Michel Gondry (Eternal Sunshine of the Spotless Mind), and an iPad app produced with interactive artist Scott Snibbe for each track, and a Biophilia live show which is premiering later this month at her three-week residency at Manchester International Festival. Exact dates are listed below.

Regarding the iPad apps, The Guardian reports:

Biophilia for iPad will include around 10 separate apps, all housed within one "mother" app. Each of the smaller apps will relate to a different track from the album, allowing people to explore and interact with the song's themes or even make a completely new version. It will also be an evolving entity that will grow as and when the album's release schedule dictates, with new elements added...For one song, Virus, the app will feature a close-up study of cells being attacked by a virus to represent what Snibbe calls: "A kind of a love story between a virus and a cell. And of course the virus loves the cell so much that it destroys it." The interactive game challenges the user to halt the attack of the virus, although the result is that the song will stop if you succeed. In order to hear the rest of the song, you have to let the virus take its course. Using some artistic license, the cells will also mouth along to the chorus. It's this determination to fuse different elements together - be it juxtaposing a female choir from Greenland with the bleeps and glitches of electronic music pioneers Matmos during the Vespertine tour, or meshing soaring strings and jagged beats on the Homogenic album - that helps explain the power and success of Björk's collaborations.

In support of the album, Bjork launched a new website, which according to her twitter, includes an "interactive Biophilia universe". The site has an audio clip at the bottom of Bjork speaking about innovations in electronic music and how she is excited to apply them to Biophilia. According to a message on the homepage when viewed in Firefox, "this website has been developed using the latest html5 technology. to experience it fully, we recommend you to use the following browsers: safari, chrome."

The album features the employment of two brand new instruments created for Bjork by Icelandic organ maker Bjorgvin Tomasson. One is an organ that Bjork controls digitally with a computer, and the other, which Bjork calls a "gameleste" is a hybrid of a celeste and a gamelan.

So far, we've been graced with two clips from the upcoming album. Back in December, an instrumental track off Biophilia appeared on the Solar System iPad app. She also posted a 33 second clip of herself driving while the new song "Crystalline" plays on the car stereo. Check both of those out below. According to her twitter, "Crystalline" will appear in full towards the end of June. She also posted a picture on facebook hinting at a video for the song: 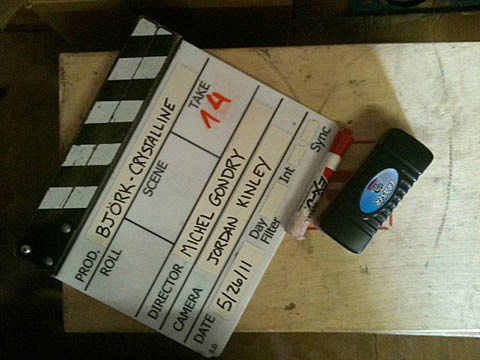 It had also been announced in February that Bjork is releasing a collaboration with Omar Souleyman, who played Music Hall of Williamsburg last night (6/12). No details on the collab have been released since, though a 2011 release date is anticipated. UPDATE: the collaboration is just a remix of a Biophilia track.

No live U.S. Bjork dates to announce yet, but the Bjork-covering jazz orchestra Bjorkestra plays Highline Ballroom Tuesday (6/14) as part of the Blue Note Jazz Festival. Tickets are on sale, and can be purchased with a 50% off discount by using the access code "BIGBAND". (note: Ticketweb seems to be having issues, so try again later if you can't get to the link).

björk: road to crystalline from Björk on Vimeo.