"i am very excited about my mutual core video being shown at times square !!" - Bjork 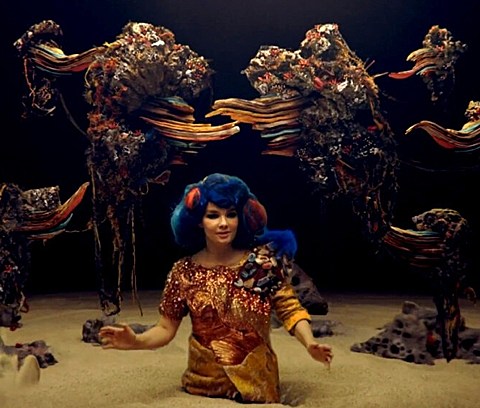 Bjork's video for "Mutual Core" has been out for a few months, but now you can get the chance to watch it on a much bigger screen than the YouTube player on your laptop. It will be playing every night in the month of March on the mega screens in Times Square, as part of this month's Midnight Moment series, which began on 3/1. Each night, the video is set to end at midnight.

A video of "Mutual Core" playing in Times Square, the original video, and more info below...

This March, a video by internationally acclaimed singer-songwriter Björk, will show every night as part of the Midnight Moment, a presentation of the Times Square Advertising Coalition (TSAC) and Times Square Arts. Directed by Los Angeles-based filmmaker Andrew Thomas Huang, this video has been edited specifically for the digital signs and is part of Björk's Biophilia Series, combining music with technological innovation and exploring themes of science and nature. In the video, the forces of nature explode across a futuristic landscape where volcanoes erupt from a dessert floor, a snowstorm transforms the environment, and anthropomorphic rocks come to life orbiting around a goddess of nature. For more information, click here.