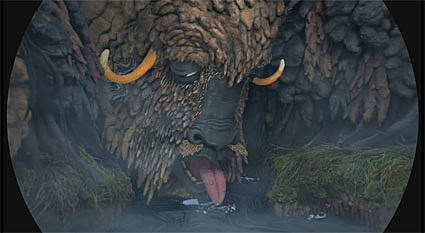 Watch it big and in 3-D (this is the best place). Watch a NY Times interview with the creators. They talk about the making of the video, mushrooms, etc... Another interview with Encyclopedia Pictura is HERE. More info, and the small embeded version of the video in 2-D (but really, watch it big), below ...

In addition to being a world renown singer, Bjork is oft considered a true pioneer in the visual arts. Her latest video for 'Wanderlust,' a 3-D gem of a production directed by Encyclopedia Pictura, readily proves this.
The song, which premiered on the 2007 release, Volta, is getting a special limited edition Single release courtesy of One Little Indian on April 13. The consumer-friendly packaging comes equipped with a CD, vinyl, and DVD insert of the 'Wanderlust' video.

Sean Hellfritsch and Isaiah Saxon, the duo behind Encyclopedia Pictura, tell Studio Daily, "Björk had seen our last music video (Grizzly Bear) and gave us a call. The concept of the video is our attempt at creating mytho-poetic cosmology of a primitive world complete with water deities and the struggle towards the future."

In the video, the Icelandic singer can be seen floating and interacting with prehistoric creatures on a lush blue river. The filmmakers used live action, puppets, and miniatures to create a dreamlike escapade, something very thematic in Bjork's impressive catalogue of music vids.

"There are a number of different elements shot, or created in post, that all have to be combined," the filmmakers said. "There is a large-scale, pre-human Yak-puppet, a version of Björk that she wears on her backpack played by a professional dancer, a large river god/transcendental beast, the landscapes shot in miniature and the CG river. So each of those elements were manifested in a completely different environment and shot differently. " [variety]