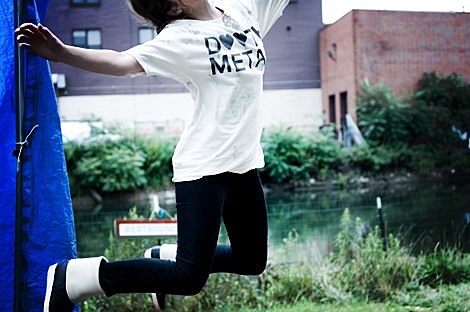 BKLYN Yard (previously The Yard) will be back in summer 2010, with weekend events running from Memorial Day Weekend to Labor Day Weekend. They'll be doing Beer Garden Fridays, Summer Saturdays and Sunday Best.

It's official, folks. We'll be back on the Gowanus! Justin Carter, Eamon Harkin and Doug Singer are already digging through records for their best outdoor jams, and we can already smell Margarita Hernandez's huaraches and taste the cold sangria. BKLYN Yard has announced a bunch of great new additions to their space -- not least of which is a bocce ball court -- and we're happy to announce the full lineup of guests who will be playing alongside the residents this summer, an eclectic grouping of folks from New York and abroad who specialize in everything from rare Nigerian disco to shimmering, summertime techno.

More on the parties, a flyer and the full BKLYN Yard schedule (including an Asobi Seksu show) is below... 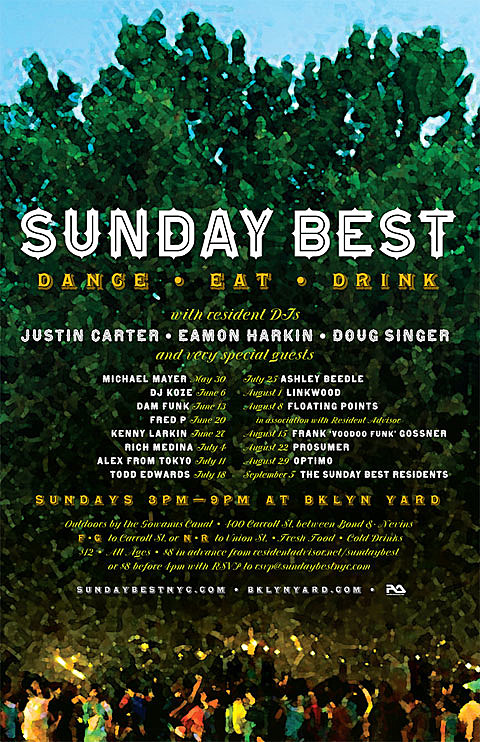 We start off our season on May 30 with Kompakt's main man, Michael Mayer (who plays the warmest, most melodic version of techno that we've ever heard) DJing next to Eamon, Justin and Doug.

June brings us a perfectly balanced smattering of sounds to compliment the residents' styles. DJ Koze, a Hamburg resident who many consider to be the best DJ in the world, is unpredictable to say the least... he counts Hall and Oates, Ween and Basic Channel among his influences, and he's joining us on June 6. On June 13, dropping in from the left coast is Stones Throw artist Dam-Funk, who will be putting down his keytar and picking up his modern soul and boogie records. It's the only time he'll DJ in New York all year long. On June 20, we're hosting local master of the deep Fred P aka Black Jazz Consortium, and on June 27, we host Detroit's Kenny Larkin, whose album Keys, Strings, Tambourines has been a staple in all three residents' bags since it came out in 2008.

The next month begins with Rich Medina joining Justin, Eamon and Doug for a spot-on July 4th barbecue. There's no one better at throwing down party jams than Rich, and we can't wait to celebrate the holiday with him. July 11 will see New York's bouncy, energetic, ace DJ Alex from Tokyo stopping in; and July 18 brings the inventor of two-step garage, Todd Edwards, to play with the boys. July 25 is a really special one, when Ashley Beedle, who's been name-dropped by Daft Punk and whose Black Science Orchestra project is a major touchstone in dance music's history, joins us.

With us on the first of August will be a gent named Linkwood, whose chunky, plodding beats will be right at home under the shade of the trees; and on August 8, we're very excited to host Floating Points, one of the most exciting artists of the year, to play with the residents three. Floating Points' music is beyond compare -- living, breathing songs that seems to jump right off the records.

On August 15, a record digger without parallel, Frank 'Voodoo Funk' Gossner, who's spent years and years digging through sometimes dangerous and almost always obscure areas of western Africa to find rarely heard Afrobeat, Nigerian disco and African funk, guests at the party; and on August 22, Prosumer, a Panorama Bar resident and Berlin producer of gritty house music, plays with us. August 29, will be a really special one. Both residents of Glasgow's recently ended Optimo institution -- JD Twitch and JG Wilkes -- share the day with the gents behind New York's relatively new-born Mister Saturday Night institution -- Justin Carter and Eamon Harkin.

And to close it all out, we'll host no one but the residents. Doug Singer, Eamon Harkin and Justin Carter will be stretching out for all six hours of the party, warming things up, bringing them to a boil and winding them down under the vintage Christmas lights in the trees.

What a great summer it's going to be

The history of the venue reads like an old crime novel: a toxic canal, a lawless harem, illegal squatters, giant cement blocks ("mafia toe tags"), packs of wild dogs, arson, etc. But with a little luck and a lot of love, things have changed. The canal-front property now hosts a grove a trees that draw toxins out of the soil. The two silos - once illegal oil transfer stations - have been converted into artist studios. And four years ago, MeanRed came and turned the space into an outdoor music venue.

BEER GARDEN FRIDAYS
Hosted by Flavorpill
Each Friday evening, BKLYN Yard becomes a waterfront Beer Garden. Locals can stop in to enjoy a rotating selection of hand-crafted beers, music provided by local DJs and bands, and, of course, Margarita's famous tacos & huaraches. No cover, 6pm - 2am, 21+

SUMMER SATURDAYS
Each Saturday, we are opening our doors for a full day of lazy lounging along the Gowanus canal. Summer Saturdays will pair notable music with locally curated food. We are excited to showcase emerging talent and local foodies in a low-key atmosphere that is fun for the whole family. No cover, 2pm-2am, all ages.

OTHER TREATS
This summer, we are adding a brand new Bocce Ball court! And after a day of sweaty athleticism, you can quench your thirst at our fully stocked bar (we recommend the "Yargaritas", the Sangria, and our Dark & Stormy cocktails) or rest at one of our new custom-made picnic tables. Plus, we now accept credit cards and we have an ATM.